All Entries Tagged With: "readylift"

ReadyLift has come out with a new suspension kit offering for the 2007 – 2011 Toyota Tundra pickup truck. We covered the ReadyLift SST kit in the summer of 2010, a comprehensive lift package aimed at hardcore off-roading enthusiasts. The latest ReadyLift product doesn’t go to the same extremes as the SST kit, but rather works to level out the Tundra’s suspension and reduce the factory rake inherent in all editions of the vehicle. 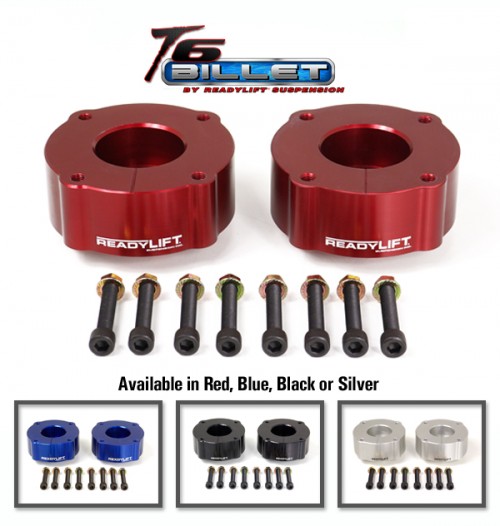 The ReadyLift T6 Billet 2.5” leveling kit offers a few extra features to set it apart from other competitors on the market. Most notably, the ReadyLift aluminum spacers that are used to lift up the front end of the Tundra bear an anodized finish that can be had in either red, blue, black or silver. The idea is for the blocks to stand out once they have been installed, and there is no doubt that bright red or blue steel will be extra visible given the additional space in the wheel well afforded by the kit.

There are no shortage of lift kit options for the Toyota Tundra. The Tundra – like most Toyotas – is quite popular amongst off-roaders and those who just like the look of a lifted truck. Not all lift kits are created equal, however, which is why we take notice when one comes along that claims to be the “only complete kit on the market.” When you see that kind of claim, it makes sense to investigate. 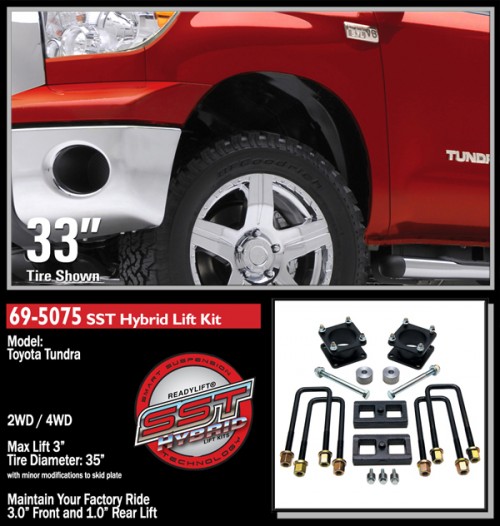 While the ReadyLift 3.0-inch SST Suspension Lift System for the 2007-2010 Tundra is NOT the “only” complete lift kit on the market, it certainly does seem as though ReadyLift has thought of everything.