Rise of the Quadrupeds: Is Robotic Off-Roading In Our Future

If you are at all interested in future tech, you have probably heard of DARPA, the Defense Advanced Research Projects Agency. Founded after the surprise launch of Sputnik in 1958, DARPA commissions research for the DOD. Among their many accomplishments was inventing the internet (sorry, Al Gore), not to mention GPS and stealth aircraft. A host of smaller technologies, from Google Maps to Siri, began as or were based on DARPA research.

Given this pedigree, DARPA deserves attention when they set their sights on something new, and the latest technology the white-coats are developing is right up our dirt-road: robotic quadrupeds. What’s most interesting about these robots for us, dear reader, is that they may one day be the successor to ATVs and rock crawlers.

A “quadruped” is simply an animal (or robot) with four legs, and it sounds as if DARPA believes this technology to be the future of mechanized transport over rough terrain, stating:

“The most difficult terrain demands the use of legs, as legs can step over both high obstacles and deep ditches. But coordinating the swing and lift of mechanical legs is more difficult than making wheels turn or tracks roll, and previous legged robots have been slow compared to wheeled or tracked ones.”

DARPA is developing this technology in conjunction with an engineering firm called Boston Dynamics, a Waltham (MA) based company with deep ties to MIT. The program is known as Maximum Mobility and Manipulation, or M3 for short. So far, the company has developed three off-road robots that you just have to see. They are fascinating and, admittedly, a little spooky, given their lifelike gaits and appearance. 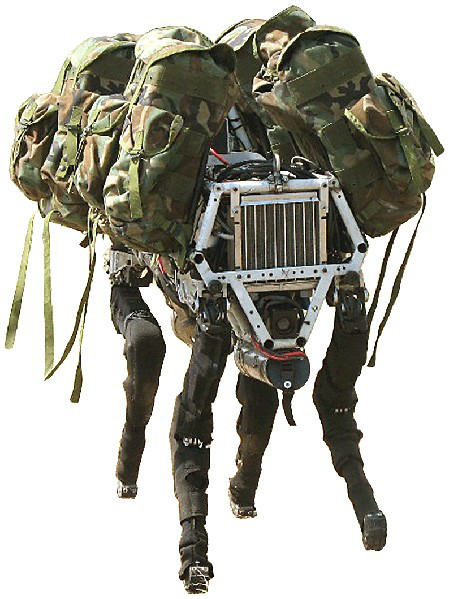 The BigDog is a robotic pack mule that could carry ammo, food and water, and other gear over almost any terrain…and do so without any help or guidance from a human.

BigDog, also known as the Legged Squad Support System (LS3), is a 240-pound “rough-terrain” robot that is designed to operate as a pack-mule of sorts. It is slow, with a top speed of just 4 mph, but it can negotiate all kind of terrains and obstacles, including:

Meanwhile, it can haul a load of 340-400 pounds over a range of 13 miles, utilizing GPS coordinates as waypoints. The legs are powered by hydraulics, which are in turn powered by an onboard gasoline-powered engine (kind of like a lawnmower, only WAY more sophisticated). 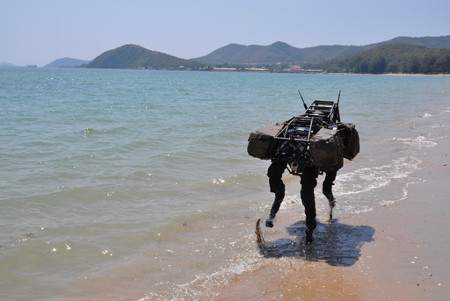 As you can imagine, there is an extensive array of sensors that keep the machine balanced and walking, including sensors for joint position and force, ground contact and load, and system diagnostics. 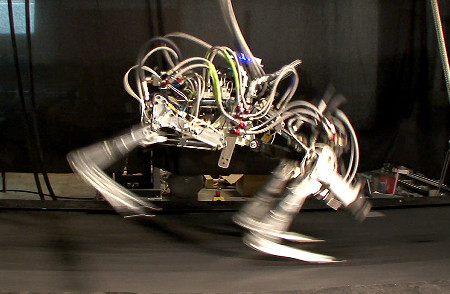 Can you run 29mph on the treadmill? Me neither. But this robot called “Cheetah” can.

If BigDog seems like a slow-poke, Cheetah is the answer. Last year, Cheetah demolished the land speed record for legged robots, hitting 29+ mph on a treadmill. Yes, that isn’t as fast as a 60 mph flesh-and-blood Cheetah, but it beats out the world’s fastest man, Usain Bolt, who has a top-end of 27.78 mph. The old robotic record, set in 1989, was just 13 mph.

The biggest limitation with Cheetah was the he/she/it was “tethered,” attached to a boom and powered by an off-board motor. Obviously, this wouldn’t be very effective in applications that interest DARPA, such as “emergency response, firefighting, advanced agriculture and vehicular travel.” Fortunately, Boston Dynamics is hard at work on the next evolution to the Cheetah platform: WildCat. 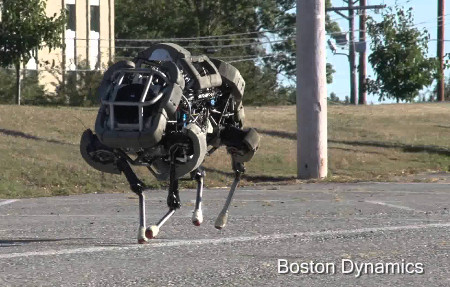 WildCat is the next iteration of the running robot. The applications are hard to grasp right now, but a dog-like robot has long been a dream of humanity.

Unlike its predecessor, WildCat is an untethered, free-running quadruped powered by an onboard gasoline engine–a two-stroke, if the smoky exhaust and “brappy” note are any indication. This engine is coupled to a hydraulic pump that actuates the legs. Unveiled just last month, WildCat has demonstrated the ability to “gallop” at speeds of up to 16 mph on pavement, with a run-time of about 5 minutes. However, the goal is for this little four-legger to hit 50+ mph over challenging terrain.

Like BigDog, WildCat is designed to be self-driving. This emphasis on automated navigation isn’t surprising, given that Congress had a goal of making 33% of the combat fleet “unmanned” by 2015. The NYT recently reported that this goal isn’t likely to be met, due to budget cuts and tech challenges, but the military’s priorities are clear. 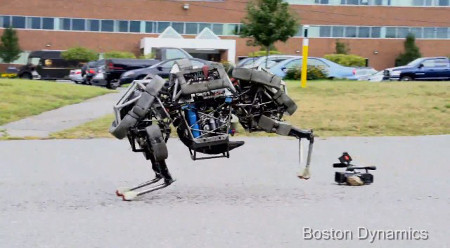 Another view of the WildCat running.

What Role Will Quadrupeds Serve in the Future?

As of right now, DARPA has been a little vague on just what role such ‘peds will serve. There has been a lot of talk of “emergency response” and “humanitarian missions,” but surely, given DARPA’s close association with the DOD, there are unnamed military missions as well. Sebastian Anthony over at ExtremeTech has posited quite an interesting theory, stating:

I don’t think I’m completely crazy in thinking that the US military might one day field a completely robotic army, with Atlas [a heavy-duty machine-gun wielding robot] firing the weapons, BigDog acting as the pack mule, and WildCat providing rapid, highly maneuverable support and flanking.

Personally, I can’t help but recall the “Rat-Things” from Neal Stephenson’s prescient sci-fi novel Snow Crash–cybernetic guard-dogs powered by nuclear isotope batteries that can break Mach 1 at sea-level. We’re obviously a long way off from that, but the videos of WildCat and Cheetah in action are more than a mite spooky, and the military applications seem practically endless. 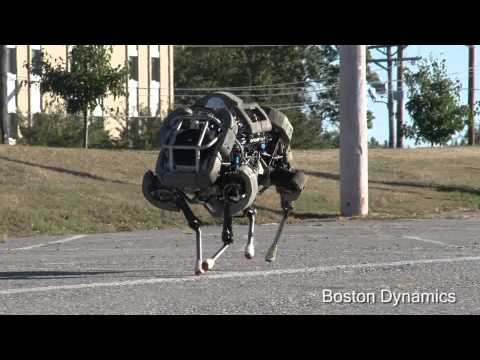 Will We Ever Drive Quadrupeds? 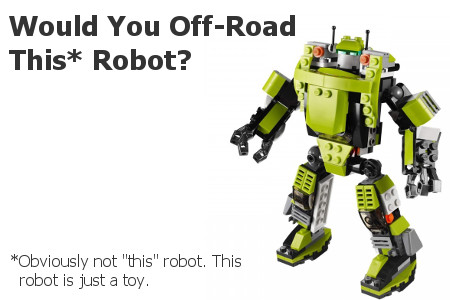 Can you imagine a day when we use legged robots to climb a mountain or visit a camp site? It sounds crazy, but maybe it’s not as crazy as we may think…

DARPA has already pointed to their belief in the superiority of legged machines over tracked or wheeled vehicles on certain types of terrain, and they’ve also noted that “vehicular travel” is a possible application for this technology. We may be a long way from the “Walkers” of Star Wars lore, but it doesn’t seem a far stretch to imagine a human-operated quadruped, capable of negotiating terrain that would foil any other machine in the military’s present arsenal. According to a 1999 article in The International Journal of Robotics entitled “The Mechanics of Quadrupedal Galloping and the Future of Legged Vehicles,” the benefits of quadrupeds in an “off-road” setting are as follows:

Legged vehicles possess a number of locomotory advantages over wheeled and tracked vehicles, particularly in traversing unprepared terrain.The discrete footfalls of a legged machine allow it to overcome obstacles with greater ease and to travel over soft terrain with less energy loss due to soil work.

If you read this blog, chances are “unprepared terrain” is a place you like to play, or would like to. Could “rock-crawlers” one day be “rock-walkers,” or at least could such competitions have a class for legged vehicles? It may seem far-fetched at the moment, but the technology is progressing rapidly, in particular the size and sophistication of sensors that keep a legged vehicle balanced and capable of adjusting its gait to varying obstacles.

What do you think? Are legged vehicles the stuff of ill-spent taxpayer money, or will they have a real place in the future of off-roading?

Author Taylor Brown is an accomplished web and fiction writer. He is the founder of AutoFoundry.com and managing editor of the The Motive Blog. When he isn’t writing, he’s wrenching on one of his projects: an ’85 BMW 325e and ’82 Yamaha XS650.