Looking at the rankings, we see that the very best brand for reliability is Lexus, followed by Toyota, Mazda, Honda, and (surprisingly) Audi. At the bottom of the list, we have Chrysler, Ford, Mercedes, Dodge, Ram, Jeep, and Fiat. 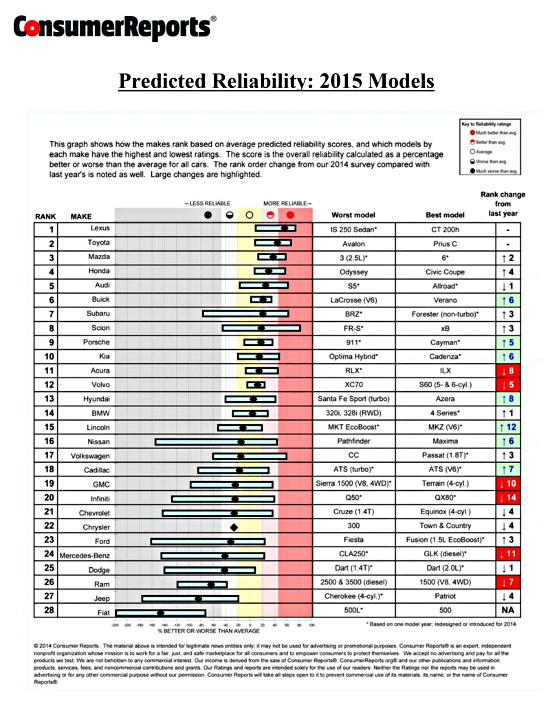 Consumer Reports reliability rankings, from best to worst. Click for a larger view.

While Chevrolet and Ford are ranked nearly as low as Chrysler, the blue error bars show that Chevy (and GMC) have some vehicles that rank as “more reliable.” Ford seems to have just one or two vehicles that rank that highly, with most models falling in the “average” or “less reliable” categories.

Ram, on the other hand, is notably less reliable than Ford. The Ram 1500 seems to fall squarely in the average category, while the Ram HD trucks are the least reliable product.

Finally, it’s important to note that the new GMC 1500 is the least reliable GMC model.

What Do These Rankings Really Mean?

Still, it’s not as if Consumer Reports data dramatically disagrees with data from JD Power. If we look at JD Power’s Initial Quality Study data for 2014, we see some similarities: 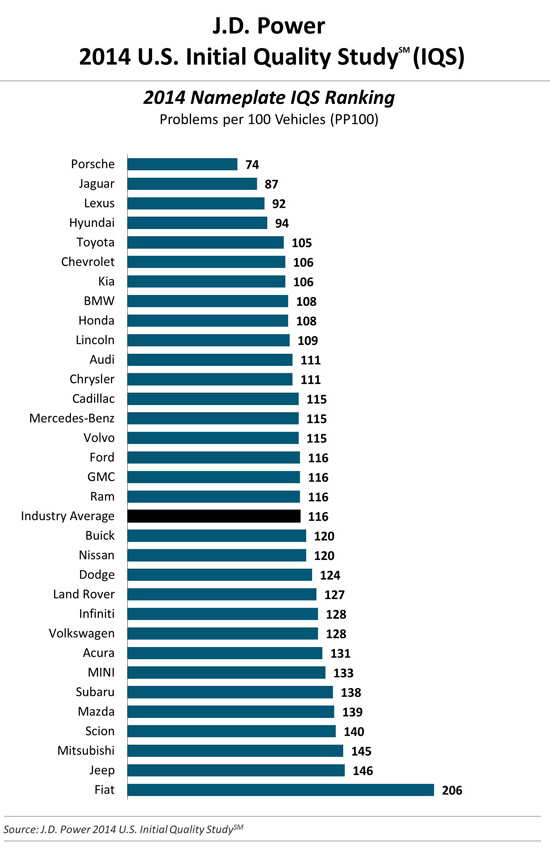 The JD Power and Consumer Reports rankings aren’t exactly the same, but we see Fiat and Jeep at the bottom of both surveys, and Lexus and Toyota near the top.

To be fair, the difference between “average” reliability and “great” or “below average” reliability is pretty small. What’s more, a lot of the “problems” have to do with infotainment systems that are hard to use, or normal growing pains that plague new models.

Still, it says here that you can’t go wrong buying a Tundra, and you ought to think awfully hard about the extended warranty on any new Fiat-Chrysler product.