A new split, swinging tailgate design could be coming from Ram in the next few years. This design is pretty radical. Is it too much or a really smart idea? 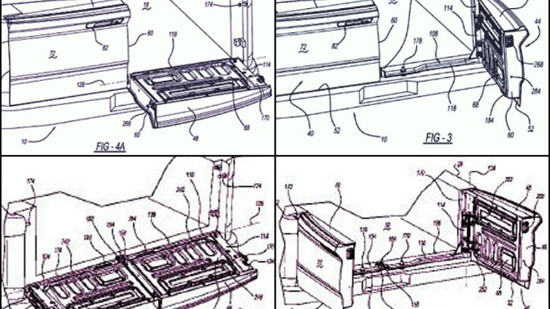 These new tailgate illustrations are from a patent Chrysler Group filed with the U.S. Patent Office. Pretty interesting idea.

The U.S. Patent Office says patent #8,740,279 was filed on February 20, 2013 by Ram engineers according to an AutoEvolution.com story. It features illustrations of a split tailgate that can fold down separately or together AND swing open. This new design idea is pretty revolutionary for the stalwart tailgate.

Referred to as the “Multi-Functional Tailgate” the design reminds us of the Honda Ridgeline design of a swinging tailgate. Although, it has the added idea of splitting the tailgate and opening one or both sides.

Another part of the patent is the doors will be operated by a touchpad. We assume this would be similar to how large SUVs have fold down seats that are operated with a button.

The touchpads are an interesting idea, but are they inside the cab or outside? If they aren’t outside, how useful would they be? And if they were outside they lead one to wonder about long-term reliability. If rain, ice or dirt get into the controls, how will they hold up? Many questions on this one.

Ultimately, this is an interesting idea that could come to market in 2015 when the Ram 1500 is scheduled for a mid-cycle refresh. If it doesn’t happen then, maybe it will in 2017 when the truck is scheduled to be redone.

What do you think? Gimmicky or a good idea?