Do QTP Electric Exhaust Cutouts Live Up To The Hype?

Power versus noise – it’s a common dilemma facing anyone considering a Toyota Tundra exhaust system. If you’re interested in additional horsepower for towing, hauling, or off-roading, a free-flowing exhaust is one of the best performance investments you can make. However, some of the most aggressive “free-flowing” exhaust systems can transform your truck’s engine note from a tasteful purr to a raucous thunderclap that is both irritating to your neighbors and headache-inducing at highway speeds.

One solution that appeals to truck owners who only require additional exhaust flow in specific situations is to install an exhaust system cutout. A cutout is essentially a Y-pipe that is welded inline with your existing exhaust piping. At its most basic, a cutout is designed so that the portion of the Y-pipe that vents to the atmosphere can be opened in order to divert exhaust gases and bypass a vehicle’s mufflers and resonators. In theory, this creates an exhaust system whose only restrictions are the catalytic converters, which increases flow, reduces back pressure and generates more power.

Quick Time Performance has an electric cutout system that is a little bit fancier than the design described above. While the QTP setup also consists of a Y-pipe, it additionally provides full remote electronic control from inside the cabin over how much the Y-pipe is opened. The system can be set to open fully or in small increments, which according to the company allows you to vary your truck’s exhaust backpressure to suit your application. At the touch of a button, any Tundra equipped with Quick Time Performance cutouts can go from a mild to wild exhaust in a few seconds. 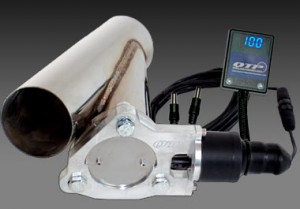 There are obvious advantages to using an electric exhaust cutout. If you are someone who frequently drives off-road where the amount of noise your truck produces is really only limited by your own personal tolerance, then the appeal of a QTP cutout system is obvious. The same can be said for anyone who takes their truck to the drag strip, where opening up the exhaust for a quick 14 second pass down the quarter mile could also be beneficial.

That being said, there are a few issues with exhaust cutouts that should be kept in mind. Although Quick Time Performance claims that the reduced backpressure provided by an open cutout actually improves fuel mileage, this claim isn’t backed up by any real-world testing. In fact, it would not be surprising if the reason that trucks running open cutouts used less fuel is because their drivers go easier on the gas pedal in order to save their hearing – and their sanity.

Perhaps more importantly, for anyone who lives in a northern climate where road salt is a fact of life, cutouts remain extremely vulnerable to corrosion. While portions of the QTP setup are made out of aluminum, there are still a number of steel components – including the butterfly plate – that could rust up and eventually seize in either the open or closed position.

Quick Time Performance cutouts are a viable solution for those who need to occasionally bypass their exhaust system for trail driving or drag racing, and who are aware of what they will be getting into in terms of noise and potential corrosion risks. However, few outside of this particular group of Toyota Tundra owners will actually benefit enough from installing exhaust cutouts to outweigh the noise, complexity, and corrosion risks that go along with them.