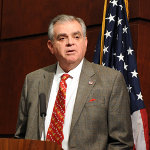 That’s right – NHTSA isn’t going to just write and enforce regulations any longer. They’re also going after companies who don’t update their designs quickly enough if/when those designs are shown to be unsafe…even 20 years after the fact.

Tim wrote up an article about the Jeep fuel tank recall a little more than a month ago, but here’s a re-cap: Jeep Grand Cherokees from 1993-2004 – and Jeep Libertys from 2002-2007 – had the fuel tank behind the rear axle. While this particular placement was perfectly legal at the time, it was understood to be dangerous back in the 1990’s and dropped from most designs at that time. Since Jeep was one of the last automakers to mount a fuel tank behind the rear axle – and since there are a LOT of Grand Cherokees on the road – NHTSA forced Jeep to recall these vehicles.

Jeep was forced to recall 2.7 million vehicles because fuel tanks were mounted in a dangerous – albeit perfectly legal – location

While consumer advocates applauded NHTSA, the auto industry argued that Jeep should not be forced to recall a design that was completely legal. Automakers feel that it’s NHTSA’s job to come up with regulations more quickly – not to penalize Jeep after-the-fact because NHTSA failed to regulate quickly enough.

The Problem With NHTSA’s New Stance

While one can argue that NHTSA doesn’t have the legal right to force automakers to comply with rules that didn’t exist, that’s really not the point here. NHTSA’s mandate is to protect consumers. If it was clear to every automaker but Jeep that mounting a fuel tank behind an axle was inherently dangerous, Jeep should have known better. Automakers can’t put people’s lives in jeopardy just because regulators act too slowly.

The problem with NHTSA’s new stance is that it forces automakers to completely redesign cars every few years. Vehicle development is tremendously expensive…if automakers have to budget for hundreds of millions of dollars in design work every few years, the business case for producing a low volume niche model (like a Corvette or FJ Cruiser) is almost nonexistent.

Between NHTSA’s new safety stance, onerous fuel economy rules, and increasingly strict emissions requirements, I fear we’re witnessing the end of an era. Enjoy the wide variety or powerful vehicles on the market while you can.