“Truckers know that….blah blah blah.” I’m a HUGE fan of the Tundra, but the voice-over guy in those Tundra commercials is really starting to wear on me. To be honest, I never really liked that part of the Tundra TV ads in the first place…but since the stunts were so cool, it was easy to ignore him. Now, a few years later, the stunts are no longer fresh and I’m starting to focus on the guy who sounds like a cross between Wilford Brimley and the Cowboy from The Big Lebowski (whose name in real life is Sam Elliot). 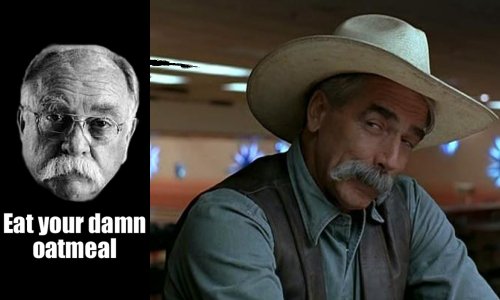 The Tundra commercial voice-over guy sounds like a cross between these two...

So, in honor of the somewhat annoying voice in the Tundra commercials, here are a couple of gag videos found on Funny or Die.

First, here’s a “behind the scenes” video that makes fun of the fact Toyota is trying so hard to co-opt the real “trucker” image.

Next, a video that makes fun of the use of the word “tranny” in Toyota’s Killer Heat Tundra Superbowl commercial. Juvenile, but only 30 seconds of your life will be wasted.

Also, just for fun, you might want to check out the new Swagger Wagon rap video that Toyota produced. Even if rap isn’t your taste, this video is pretty hilarious. Toyota has done a great job promoting the new Sienna (at least according to me).