LA Times journalists V&B are at it again – we criticized them a few weeks ago for using inflammatory images and unsubstantiated opinions to stoke consumer fears of Toyotas and unintended acceleration, and now we find them accusing Toyota’s electronic throttle system of being defective (link)…with only manipulated and incomplete data to support their claims. 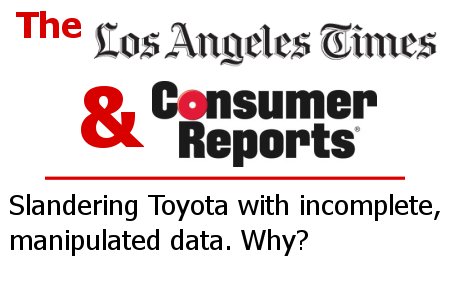 To be clear, we have no business criticizing others for journalistic integrity…but we feel obligated to evaluate these accusations critically considering how many Toyota owners are driving in fear. Here’s why this reporting (link) from the L.A. Times is slanderous:

Let’s assume for a moment that the L.A. Times article is correct and that Toyota has an electronic throttle control system problem. If this is really the case, Toyota would have an inordinate number of complaints when compared to other manufacturers:

Toyota and Lexus vehicles received 41% of all consumer complaints to a federal database about runaway acceleration, more than Chrysler, General Motors, Honda and Nissan combined, analysis by Consumer Reports found

So far, so good. The data may confirm our hypothesis. However, what about the other 59% of complaints? What is the source? According to an expert cited in a previous LA Times article by V and B (link):

Again, assuming that Toyota’s electronic system is broken, they should have higher than average reported problems…but every manufacturer should have some claims, shouldn’t they? After all, according to the expert most of the time the issue is human error. We’re all humans and we all make errors, so all cars should have reports of unintended acceleration.

Of course, there are a few possible explanations for the discrepancy. Consumer Reports, which prepared this data, discounts all of these unintended acceleration complaints saying that “because it is dependent upon motorist submissions, the NHTSA complaint database does not reflect all sudden, unintended acceleration cases.” In other words, the data is incomplete. It’s hard to make the case that Toyota has a problem based on incomplete data. That’s strike one.

Strike two is that Consumer Reports didn’t evaluate every complaint – they only evaluated complaints where the consumer “sustained unintended acceleration that the driver found difficult or impossible to control.” Out of 5,916 complaints about 2008 models that were registered with NHTSA, only 166 complaints matched these criteria. Consumer Reports tossed out the other 5,750 NHTSA acceleration complaints. However, if Toyota’s electronic system was really faulty, why throw out all the complaints that don’t match the “out of control” criteria? A faulty system would have problems at 2 miles an hour, 20 miles an hour, and 200 miles an hour, wouldn’t it? Complaints shouldn’t have to be limited to certain special cases if the system is indeed faulty…so why doctor the data? 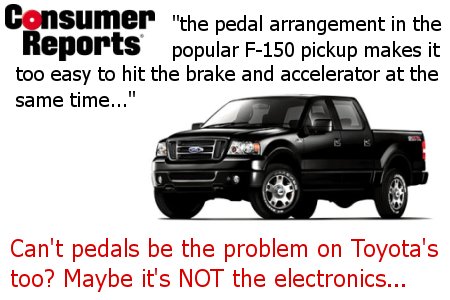 Consumer Reports says the F150's acceleration complaints are due to pedal problems, yet the same type of data for Toyota's indicates an electronic throttle problem?

Strike three is the way that Ford’s data is handled. When you look at the numbers, you’ll see that Ford had twice as many complaints as they “should” have, based on their market share. Consumer Reports and the L.A. Times were willing to explain away Ford’s discrepancy by citing the fact that most of these complaints were against the F150, saying that the F150’s pedals are too close together (therefore, there’s no problem with the truck’s electronic throttle).

To be fair, this explanation makes perfect sense…but acknowledging that pedal distance is a factor in out of control acceleration reports undermines the argument that Toyota’s electronic throttle system is faulty. After all, if the F150’s above-average number of complaints are a result of pedals, couldn’t it be that Toyota’s complaints are also a result of pedals that are too close together? Or perhaps floor mats? Or perhaps pedal size? Or perhaps driver panic was a factor, just like UCLA professor Schmidt says that it is the vast majority of the time?

Couldn’t it be that these stats are incomplete and possible even incorrect? It’s not nearly as exciting and “newsworthy” to say that this data is incomplete and/or insignificant, but it would certainly match the other data we have, i.e. the 9 NHTSA investigations of Toyota acceleration complaints that found no flaws, plus the internal Toyota investigations that found absolutely no problem.

Finally, one of the authors of this article (Ralph Vartabedian) has a reputation for reporting less than the whole truth. Vartabedian wrote an article in 2008 essentially accusing John McCain of being unfit to be President because he collected a disability pension. Of course, Vartabedian’s article didn’t actually say that McCain was unfit – instead, he just intimated that McCain might be. If you really want to evaluate these LA Times articles about Toyota fairly, take a moment to review Vartabedian’s article on McCain and the numerous rebuttals:

While every reporter worth his or her salt is accused of bias, a brief glance at Vartabedian’s body of work shows that his “style” seems to be incomplete reporting combined with inflammatory headlines.

Bottom Line: The L.A. Times and Consumer Reports have manipulated incomplete data to accuse Toyota of having a faulty electronic throttle system. While it could be that Toyota has a problem, this type of reporting isn’t helping anyone discover the truth. Instead of going for outrageous headlines that get syndicated nationwide, V & B should stick to the facts and make their case in a logical fashion.