According to JD Power the Tundra averaged 122 problems per 100 vehicles, which is 21% better than the industry average of 155 problems per 100 vehicles. These “problems” can range widely, from complaints about the way a vehicle drives to engine and transmission issues. This highlights one of the biggest complaints about J.D. Power’s study: An owner’s lack of understanding about a particular feature can often hurt dependability ratings, not to mention their perceptions about the way a truck should ride or drive. 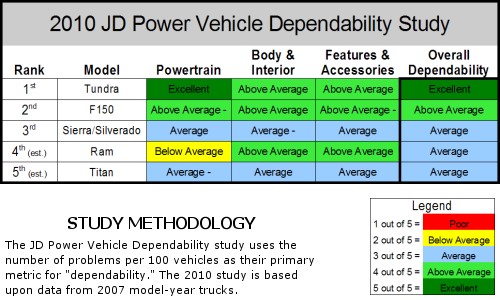 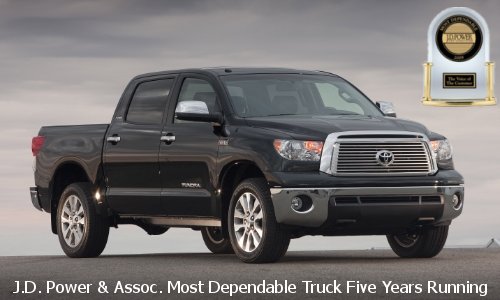 Based on these ratings, it would seem that the Tundra narrowly beat-out the F150 for J.D. Power’s 2010 award. This would agree with JD Power’s most recent initial quality survey, which ranked the Tundra and F150 as equals late last year.

The fact the Tundra won the award based on the dependability of the 2007 model year is impressive considering all of the problems we documented in the first model year of the new design. From bed bounce to tailgates to camshaft and propeller shaft recalls, 2007 was not a great year for the Tundra in terms of quality…and the Tundra won anyway.

If Ford, GM, and Chrysler can’t beat Toyota quality during the first model year of a new design, it’s likely they won’t beat Toyota in 2008 or 2009 either. Perhaps the 2010 model, with it’s VVT-i TSB, will be the first model year to have more problems per 100 vehicles than the domestics. If so, it’s not going to be until 2013 that the Tundra loses this particular crown.

Of course, it should be said that we don’t put a lot of stock into any single award. No single opinion about quality is sufficient – it’s best to group a few different studies and opinions to get a firm grasp on the quality of a particular make and model. Having said that, the Tundra’s quality is ranked highly in both J.D. Power’s initial quality AND long term dependability studies, as well as by Consumer Reports, Consumer Guide, Edmunds.com, and the Harbor Report.

While the Tundra is not perfect, all the studies show that the Tundra’s quality is excellent. The F150, depending on the studies you look at, typically ranks 2nd or ties for first, so it’s likely that the F150’s quality is on par with the Tundra. As for the Ram, the GM Sierra/Silverado, and the Nissan Titan, J.D. Power shows that those brands are simply average (and average is not bad). Other studies echo these results. If you’re in the market for a new truck, it sounds like the Tundra and F150 should be options #1 and #1A, with the others being tied for 2nd.

All in all, this is great news for everyone. Regardless of manufacturer, half-ton truck quality is very, very good.