Conceptually, the hybrid camper described by Gas 2.0 is a neat idea. You drive to your chosen campground and the camper stores electricity that then allows you to have power to run appliances without needing to hook up to an outlet somewhere. At first blush, the idea seems like a winner…but then reality hits us. 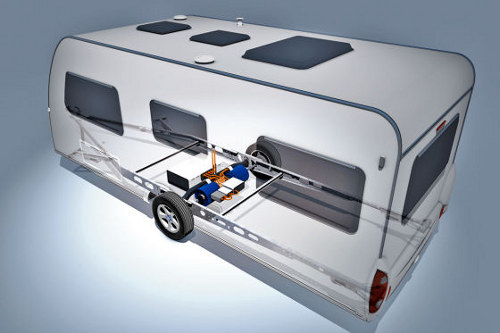 Knaus-Tabber's hybrid camper concept might be a good first step, but there are lots of problems with this idea...

Here’s why the current concept being floated by Knaus-Tabber (the hybrid camper concept manufacturer) seems destined to fail:

Decreased vehicle power. One way that the camper generates power is by having generators steal power from the turning wheels. The result of this is that the generators create additional drag beyond the sheer weight of the camper. This extra drag artificially raises the weight of the camper. Anyone with experience towing loads knows that the more weight being towed, the less power is available to tackle hills. In addition to robbing the vehicle of extra power, the extra drag could have severely detrimental effects on handling.

Inefficient energy conversion. What the tow-behind hybrid camper does is essentially transform gasoline or diesel fuel into electricity. The problem with this specific application of the idea though is that it does so by forcing your truck to fight against its generators. With large trucks already getting abysmal gas mileage, the tow-behind hybrid camper will make the situation even worse. Unlike a stand-alone generator that is designed to directly convert fuel to electricity with the loss of some unwanted heat generation, the hybrid camper forces your truck to convert fuel to motion (again, losing some to heat), then steals this motion and converts it to electricity, losing even more to heat and friction. This extra step and extra waste is an added fuel cost that will apply for the lifetime of the camper.

Of course, the biggest gripe here is that regular old electric generators that run on a small amount of gas are incredibly efficient. Stealing power from the tow vehicle seems like it would be inherently less efficient than a good Honda generator.

What do you think: Would you buy a camper with regenerative brakes or generators on the wheels?