The differences between the Honda Ridgeline and the Toyota Tundra demonstrate the fundamental difference between the understanding each of these Japanese manufacturers has of the North American truck market. After spending decades selling mini-trucks and three-quarter size versions of their domestic competition’s pickups, Toyota decided to target the not-so-big three and develop a full-size pickup that was every inch the equal of the perennial class-leading F150 and Silverado. The Tundra has been a definite success in that regard, even surpassing the competition out of Detroit in terms of certain features and capabilities.

Honda, to put it mildly, decided to go another route. With no history of selling trucks in the United States, the Ridgeline appeared out of nowhere as a sort of combination pickup truck / SUV hybrid that claimed to be a full-size truck but fell short in several crucial areas – most notably horsepower, towing capacity and, well, size. In terms of exterior dimensions, the Ridgeline follows the old Toyota game plan of trying to offer big features with a small footprint. Sadly, in the minds of truck buyers, the length, width and height of a vehicle make a difference, and when seen side by side the Ridgeline is clearly dwarfed by the Tundra. 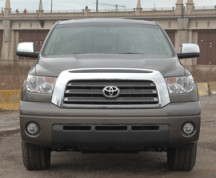 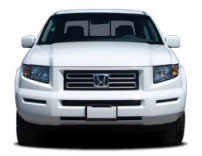 Here’s an approximate proportional view of the Tundra and the Ridgeline side by side.

Honda has chosen to outfit the Ridgeline with only one engine choice, a 3.5 liter V6 which is rated at 247 horsepower. Not only is this a full 120 horsepower less than the available 5.7 liter V8 in the Tundra, but historically, pickup trucks have offered a wide range of drive train choices in order to satisfy the individual needs of buyers. Both vehicles offer variable-valve timing in order to improve fuel consumption, yet the Toyota’s 13 miles per gallon in city driving and 17 miles per gallon on the highway compare favorably with the Ridgeline’s 15 / 20 rating – especially when you factor in the 2 extra cylinders and 50 percent greater available power. The Ridgeline also has a smaller box and less than half the towing capacity of the Tundra.

It seems obvious that the Honda Ridgeline is not a serious player when it comes to the full-size pickup truck game. So what exactly is it? Well, to put it simply, the Ridgeline is a pickup truck for people who don’t buy pickup trucks. With its vast array of storage compartments and locking “trunk,” it’s a mini-Chevrolet Avalanche. With an independent rear suspension and smaller dimensions, it’s the kind of truck that won’t intimidate drivers moving up from a Honda SUV. In this sense, it is quite successful – the driving characteristics are more similar to a crossover than a pickup, yet it offers a degree of cargo storage that isn’t found in any other Honda sport-utility vehicle. The ride height lets buyers feel more confident on the road, and the four-wheel drive system adds an air of legitimacy to the entire package.

The Tundra and the Ridgeline are clearly not competing for the same share of the market. In fact, it’s not really easy to see if the Ridgeline has any competition at all in the niche that Honda has carved out for the vehicle. Full-size truck buyers will most likely steer clear of the Ridgeline based on its specifications alone, but it could definitely hold some appeal to those in the mid-size segment, or anyone wanting to fulfill their fantasy of pickup truck ownership without having to extend their driveway or find a bigger parking spot at work.