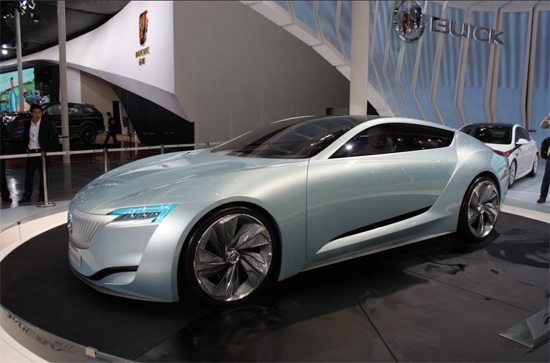 Could this Chinese-built Buick concept be exported to the U.S.? You bet. How’s the bailout feel now?

The admission came from Autoblog.com that was covering the Shanghai Motor Show, General Motors press conference. At the press conference, GM announced an aggressive plan to ramp up their presence by adding 400 dealerships in 2013 (4,200 total). It is planning on reaching 5,100 in 2015.

Production of these vehicles will remain in China, however, they estimate exporting a record 100,000 to 130,000 cars this year. Plans are set to export even more.

Autoblog naturally asked the follow-up question if this meant these cars could make their way to the U.S. GM China president Bob Socia responded with:

“It could very well happen. It could very well happen. You know, I’m not sharing any plans with you, but we try to keep open as to what makes sense. And Tim [Lee – GM’s president of international operations] is the right guy to talk about your manufacturing footprint. If it make sense to tool up a vehicle in one location as opposed to two, from an economic perspective, Tim will say that’s what we should be doing. We’re open to be doing that. There’s no reason why we can’t be exporting to the States, and obviously the States are exporting here.”

The thought would be that most of these vehicles would be Buick’s. The facts are that the Buick brand is a BIG seller in the Chinese market and a joint venture with the Chinese Automaker SAIC is creating an environment for SAIC to have more control. These factors along with new trade agreements could create this reality.

Even with Socia ending the conversation by saying that there are no current export plans, it is amazing that a U.S. bailed out company would export Chinese built cars back to the U.S. This is a huge blow for the UAW and taxpayers who were wanted the bailout money to keep/create jobs in the U.S.

With many, many GM plants sitting idle or downsized, the question is why you would import Buicks rather than build them stateside. We know the answer to that one – poor leadership (a hallmark of past GM failure).

What do you think? Are you excited about GM exporting a Chinese-built Buick to the U.S.?