Is Toyota’s Entune System Destined to be Unnecessary?

For years, automakers have been working on in-car infotainment systems to drive up sales, but are they doomed by a confluence of factors? Will anybody be sad to see them go away? 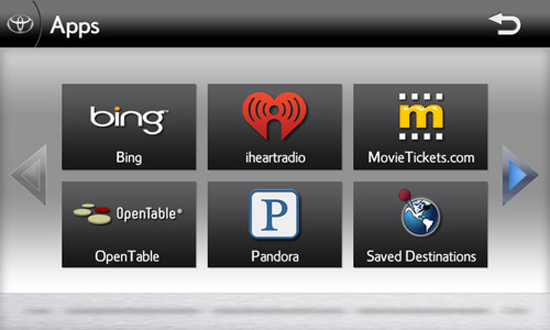 In-car infotainment systems like Entune has serious limitations and competition from smartphones. Are they doomed?

In-car infotainment systems have long been boasted by car manufactures as the future of in-car entertainment. And in some regards, they are nice systems. Yet, with cell phones becoming more capable, ongoing price concerns and limited abilities, is it just a matter of time until they go away?

One of the biggest issues facing in-car infotainment systems is that they are constantly lagging behind consumer electronics. For example, the MyFordTouch system has a 10GB hard drive for storing songs. That is a good idea (saves battery power) and beats some Toyota vehicles that don’t allow for music storage. Yet 10GB of storage is yesterday’s storage needs. You can literally walk into Walmart and buy a 1TB drive (1,024 GB) for about a $100. Who gets excited about 10GB? Nobody.

Another issue that had plagued them is the time/effort it took to upgrade the navigation system. In the past, you would need to visit your dealer for upgrades. Now, they have upgraded (in certain vehicles) to inserting a USB drive into a docking bay. Frankly, that way of upgrading is still way behind especially with wireless upgrading on cell phones. A smartphone user can update their phone in a matter of minutes from anywhere. Why spend time/effort to update your in-car navigation system when your smartphone is most likely up-to-date and at times, more accurate?

Why can’t these systems be upgraded faster and be more conducive to keeping with other consumer electronics? The testing and development time of vehicles is why, according to a story on ComputerWorld.com.

Building a new car is a multi-year process.

“The iPhone was introduced in 2007. The cars being sold in 2012 and 2013 were just being planned then,” said Scott Fosgard, a spokesman for infotainment systems at General Motors told ComputerWorld.

Another thing to consider is the harsh conditions of vehicles.

“Inside your vehicle, technology has to be able to live from 70 degrees centigrade to minus 40. Your phone and computers don’t have to meet those requirements,” said Jim Buczkowski, a Henry Ford Technical Fellow and director of Electrical and Electronics Systems at Ford Research and Innovation told ComputerWorld.

Fosgard says that you have to remember that in 2007, infotainment systems were ranked 25th on the wish list for GM customers. Now, it is fourth on the list.

Our question though is how old is that list? Are consumers still demanding that system or is the growth in smartphones dampening that demand? Seems likely that consumer demand will shrink as more consumers see the limits of in-car infotainment systems.

Another big issue for consumers is the increased data usage of their cell phones. With many carriers nowadays limiting data usage, ending unlimited plans and even throttling usage, data plan prices are rising. Many systems like the Entune stream their apps and music through your cell phones data plan. This means that you most likely need to either be more aware of data use or have to increase your cell phone data plan accordingly. This is a real, increased cost to most consumers.

Imagine if you were buying a new $35k Toyota Tundra. You would need to consider the loan payment, insurance and fuel costs PLUS your cell phone bill.

Toyota likes to boast that the first three years of Entune service is “complimentary.” This is great and all, but with car ownership at around 71.2 months according to R.L. Polk and Company, you will be paying for this system at some point. How much? Depends.

Toyota says built-in apps include “Bing™, listen to iHeartRadio, purchase movie tickets through MovieTickets.com, make dinner reservations with OpenTable®, listen to Pandora® and more.” While Data services include “Stocks, Weather, Traffic, Fuel Prices and Sports.” Why would you need to check your stocks while driving is beyond us? But, if you do, would you grab your cell phone or the Entune system?

Also, who knows what technology we will have or need in three years. It is quite possible by the time the “complimentary” service period ends, the Entune system will be outdated anyway. Would you pay a monthly fee for an outdated system?

The confluence of these issues will plague in-car infotainment systems for the foreseeable system. As much as automakers try to improve the systems, so do the cell phone makers. With car makers being much slower to adapt to technology changes versus consumer electronics makers, who do you think will have the latest and greatest technology sooner? Pretty easy answer to this one: consumer electronic makers.

What do you think? Are in-car infotainment systems a waste of time or are they really useful?