Question 1: How much better do Doug Thorley headers flow compared to the stock 2007 and up Tundra exhaust manifold?

We were particularly curious as to the answer to this question due to the fact that the 5.7 liter Tundra’s stock equipment has such a stellar reputation. We also asked Jamie what exactly they did in order to improve on the Toyota design, and if it was difficult to produce meaningful power gains. 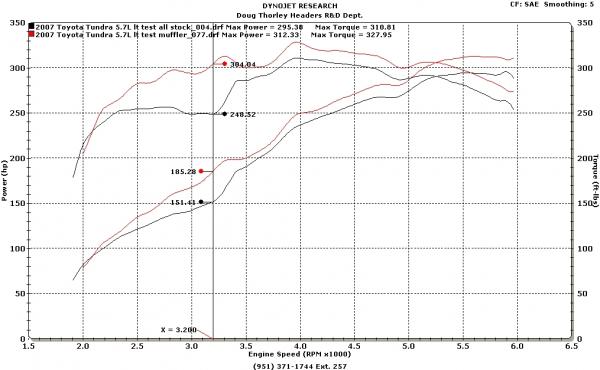 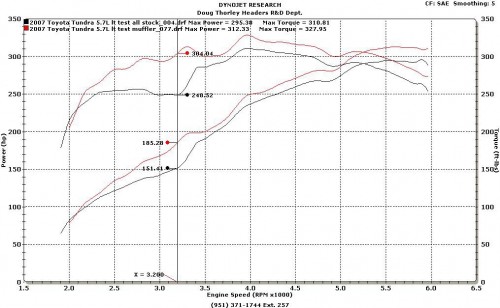 Long tube Doug Thorley headers on a Tundra 5.7 (click for a larger view)

Jamie’s response was that Doug Thorley introduced scavenging into the Tundra header mix, which was absent from the stock units. According to Jamie, while scavenging is essentially headers 101 for the aftermarket, Toyota didn’t rise to the occasion when producing their stock units due to the fact that their tri-y design doesn’t actually offer a true division between each tube. As a result, there are runners which are simply dumped into the first available tube for each header. He further went on to explain that the lack of a smooth transition between primaries and the merge collector in the stock headers also fight against adequate scavenging. The Doug Thorley units take care of this problem by offering three distinct collectors per side, in addition to pairing up each tube according to the engine’s firing order in order to properly phase the headers.

The proof, as they say, is in the pudding. The dyno graph above shows a solid increase in torque from about 2,000 RPM on.

Question 2: Is there any benefit to installing headers without an after market cat-back exhaust system already in place?

Jamie assured us that all of the headers that Doug Thorley tests on the dyno in order to back up their performance claims are done with fully stock exhaust systems. Their dyno graphs indicate that usable power is definitely generated by their headers even in the absence of a full exhaust treatment.

We did follow-up with a question asking whether there were any particular catback systems that he would recommend in order to match up well with the headers produced by his company. Jamie’s response indicated that higher cost, higher quality catbacks outperformed inexpensive units, but that it was largely a question of personal preference when it comes to sound, not total power output when it came to differentiating between the major manufacturers.

In other words, it doesn’t matter what Tundra cat-back exhaust you buy so long as you buy a good one.

That wraps up the first part of our discussion with Jamie from Doug Thorley headers, in which he helped us understand why we might want to consider an aftermarket solution to replace our stock Tundra units. In the second and final parts of our interview we will delve into one of the most contentious aspects of the header debate – short tubes versus long tubes – and get some long-awaited answers regarding pickup truck applications for each.