All Entries in the "Tundra Wheels and Tires" Category

Recently, we found an interesting thread on Tundrasolutions.com about breaking wheels caps. As a potential problem with Toyota Tundra pickups, we thought it best to follow up on this. Here is what we found. 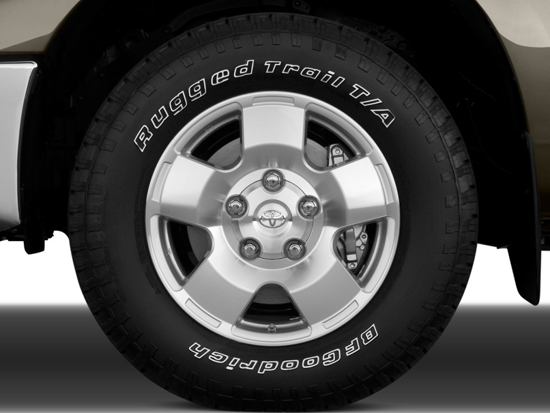 Do Toyota Tundra trucks have a breaking wheel cap problem?

Are you interested in a second set of wheels for your car or truck? Maybe you’re looking for some knobby off-road tires to put on your Tundra on the weekends? Maybe you’re thinking about how fast your wife’s car would be with a set of racing slicks? Maybe you’re just looking for a way to make it easy to add and remove snow tires from your daily driver without all that mounting and balancing.

Recently, Bridgestone demonstrated a new prototype tire that requires requires no air and is supposed to be greener to make and recycle.

Bridgestone Airless Eco-Tires has spokes that take the place of air making them into true non-flat tires.

Tires are like opinions – everyone’s got a set. More importantly, everyone chooses that particular set of rubber for different reasons. Some owners are still riding on the stock Tundra tires that came with their truck, while others liked their stockers so much that they replaced them with an identical set when the originals wore out. Others decided to experiment with a different brand of tires in order to give their Tundra better comfort, more grip or a quieter ride, while some focused in on specialty tires designed for off-road adventure, maximum performance on the pavement or solid towing stability.

We’ve put together a simple tire survey to try and get a better idea of what TundraHeadquarters.com readers are running underneath their trucks. The idea is to figure out what the best or most popular brand of tires for the Tundra are. We realize that some of the brands listed don’t offer OEM replacement sizes for the Tundra, but there are many drivers out there who have gone taller, narrower or wider with their tire selections. In the end, all we are looking for is your own opinion on what you think is the best brand of tire for the Toyota Tundra.

Which Tires are Made in the USA?

The industrial world is increasingly the province of multinational corporations. The call to “Buy American” has been met with muddy results over the past decade as major automakers from almost every country involved in the production of automobiles build vehicles at plants located both inside and outside of the United States.

Tires are in a similar boat. Major players in the tire industry that are headquartered outside of the United States include Michelin, Continental, Yokohama and Bridgestone, but each of these companies also manufactures tires within American borders. Many of these U.S. soil tire plants were acquired as part of brand buyouts, such as Michelin’s purchase of Uniroyal-Goodrich and Bridgestone’s acquisition of Firestone. Even Yokohama has a plant in Virginia, giving an American dimension to its primarily Japanese operations.

The question is, which tires are made in the USA?