It’s that time of year when we look back on all the great Toyota Tundra news and events of 2008 and get excited about what’s to come. There’s no better place to start here on Tundra Headquarters than with one of our most loved sports: angling.

Kevin VanDam claimed the 2008 Toyota Tundra Bassmaster Angler of the Year title again this year for the fourth straight year.

This program looks at those anglers who fish during the Elite Series season and awards those that work hard at their sport. The winner of each event in the Elite Series is awarded a certain number of points based on how they finish. Then, in August at the Champions Choice angling competition, those points are totaled and the award is assigned.

The 2008 Champions Choice event was held in Syracuse, New York, on Lake Oneida.

Toyota does quite a bit to sponsor and promote the sport of fishing. In fact, Tundra Headquarters wrote about its Toyota Trucks Bonus Bucks program early in 08′ and we anticipate more angler events in 2009. Visit Toyota’s very own Fishing site for details.

Pricing and Options for the 2009 Tundra

With 2009 at our doorstep it’s time to look at pricing for new Toyota Tundras. Just announced by the manufacturer, it looks as though prices will increase by an average of $104.

We’ve already written about Toyota’s 2009 Racing Development packages for the Tundra, but now we have prices for you too.

The TRD Sport is designed for in-town drivers and will be available for the 4×2 regular and double cab, standard bed models. These models need to have the 5.7 liter V8. The going rate for the package will be either $2,408 or $3,814 depending on the cab size.

This year, Ford earned the Top Safety Pick designation with its F-150. Both the F-150 and the Tundra were the only two full-sized pickups to make the list.

This isn’t the first time Ford and Toyota have been neck and neck when it comes to safety issues. In fact, Tundra Headquarters did it’s own Ford F150 and Tundra comparison earlier this year. Our analysis rates the Tundra as a safer vehicle and if we were asked to do the comparison for the 2009 model, we’d still vote for the Tundra.

There are 72 cars and trucks on the safety list. Each car is tested using a crash test specific to the Insurance Institute for Highway Safety and completely independent of the crash testing done through the National Highway Traffic Safety Administration.

Safety is always critical in a truck ownership. I’d say the Tundra is still a great buy, even at number two.

Is The New Dodge Ram Soft?

The new 2009 Dodge Ram offers quite a few “refinements” not found on most pickups. In addition to a more powerful – and more economical – HEMI, Dodge is also offering a rear coil suspension on the new Ram and the new “RamBox” feature on their new crew cab trucks. While it makes sense for truck manufacturers to innovate, at what point do these “refined” additions hurt a truck’s image?

Is the new Dodge Ram too “nice and refined” to be considered tough?

First of all, it’s important to understand today’s truck market. According to many industry analysts, the days of the “casual” truck user are nearly over. While it was once a common occurrence for consumers to evaluate a truck as a commuting vehicle, the vast majority of today’s truck buyers are more interested in a pickup as a work vehicle than as a status symbol. No longer are we going to see “soccer moms” and urbanites buying crew-cab pickups that are never used for their intended purpose.

If these industry analysts are to be trusted, then future truck sales will be fostered by utility and work features.

Tiger Trucks has significantly expanded their product line since the company first began doing business in Oklahoma almost ten years ago. Although the company is primarily known for its small, runabout trucks which offer high fuel economy numbers coupled with good cargo capacity and a low initial purchase price, the company has also branched out into larger, longer vehicles with increased cargo capacity as well as passenger vans. 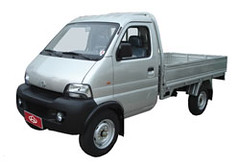 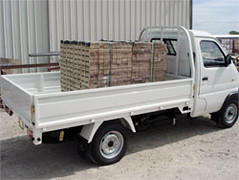 Their recently released flagship truck, the Tiger Champ 4500, is an excellent example of this new trend. The Tiger Champ is powered by a 4 cylinder engine making a maximum of 54 lb-ft of torque. While this number may sound small, it is enough to give the vehicle a cargo capacity of almost 4000 lbs