BusinessWeek contributor Ed Wallace wrote an article titled “The Toyota Witch Hunt” that is a must-read for anyone following Toyota’s unintended acceleration debacle. Here are some of the highlights:

Wallace has uncovered information that contradicts the testimony of Rhonda Smith (below) who claimed her 07′ Lexus ES350 accelerated out of control despite her every effort to stop the vehicle. Smith claims that the vehicle would not stop no matter how hard she hit the brakes, and that shifting into any other gear – even reverse – would not stop the car. For many, Smith’s testimony was heart-felt and compelling. However, both the facts of the investigation and statements that Smith has given in the past disagree with her testimony. 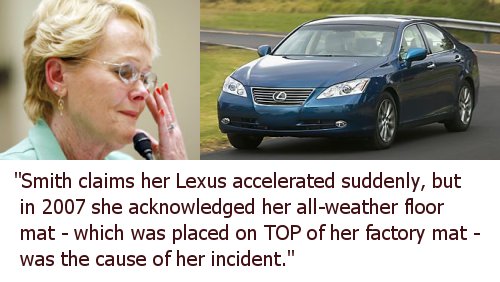 Rhonda Smith's testimony about her 2007 Lexus ES250 and unintended acceleration left out the fact she had two floor mats in her car - one on top of the other.

When Smith’s accident occurred, NHTSA sent an investigator to her home to try and determine the cause of her problem. By Smith’s own admission, her Lexus had two floor mats installed – one on top of the other – and NHTSA determined this was likely the cause of her problems. In 2007, Smith commented negatively about the way her floor mats were installed, which would see to indicate she believed the mats contributed to her experience.

Smith’s other claims – that she tried applying the emergency brake and putting the car in reverse – did not match the facts. Applying the emergency brakes would have locked up the rear wheels (the ES350 is FWD), leaving tell-tale marks on the tires. However, no tire damage was found. Smith’s claim that she tried reverse is laughable – if she really believes that happened, she was clearly flustered. Shifting into reverse and highway speed would have destroyed or severely damaged the engine and/or transmission. While Smith was undoubtedly scared, her testimony last week shouldn’t be given a great deal of weight.

Wallace also comments about David Gilbert, the associate professor of automotive technology at Southern Illinois University. Gilbert’s testimony was sponsored by Sean Kane, the “safety expert” who reluctantly admitted to being paid by attorneys bent on suing Toyota. More importantly, Gilbert claims to have found a problem with Toyota’s system in less than 4 hours, yet he hasn’t shared his findings with Toyota, nor has he agreed to demonstrate the problem he’s found in front of Toyota engineers.

Sidebar – Wallace doesn’t mention this in his article, but we’ve learned that David Gilbert isn’t in fact an engineer. His Bachelors and Masters are in “Industrial Arts Education,” and his PhD is in “Workforce Education and Development.” They’re worthwhile disciplines for sure, but it seems that electrical engineering would be more pertinent to the issue at hand. What’s more, the Automotive Technology program at Southern Illinois University is frighteningly lacking in engineering classes. This isn’t to say that the program isn’t valuable, but it’s hard to believe that Gilbert is more qualified to test vehicles than NHTSA, Toyota, or Exponent.

Wallace closes his article by saying:

…let the mechanics and engineers do their jobs and either find the fault or give everyone a reasonable explanation for what happened. The only problem with that suggestion is it’s already been done. And no one wants to accept the conclusions

Wallace is yet another independent voice that believes “Recallmagedeon” is a farce. Toyota has problems, but electronic throttle controls that suddenly accelerate out of control aren’t one of them.