It’s happened to almost anyone who lives in a cold climate. One day, you go out to start your car or truck and all you get when you turn the key is a weak whirring sound from under the hood, a click from the starter relay – or nothing at all. Whether it is because the dome light was left on, an accessory was plugged in all night, or simply the result of a battery giving up the ghost in very cold weather, the end result is the same: you’re not starting under your own power. 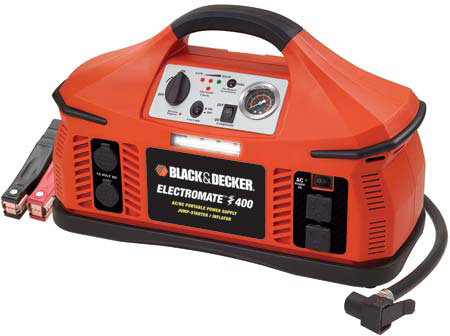 Black and Decker's Electromate 400 is a nifty emergency battery.

Jumper cables are the obvious option (and everyone should have some in their vehicle), but sometimes when you need a jump-start there is absolutely no one around who can help you. Jumper cables also require a vehicle that can maneuver close enough to your front end to make a solid connection – which is hard sometimes when you’re driving a big bad truck and all your friendly Samaritan has is a little econo-box. There’s also the fact that some cars just don’t have the juice to jump a big vehicle. But there’s some good news here…

Improvements in battery technology over the past couple of years have created a new class of product that enables people to jump-start their own vehicles without the need for third-party assistance. One such portable battery pack is the Black & Decker VEC026BD Electromate 400. This handy device offers a lot more than just the ability to jump-start your car or truck with its 450 amps of built-in power.

– The Electromate 400 combines an LED work light to help you see what you are doing under the hood, an air compressor to fill any sagging tires that may be victims of a slow leak, and two AC outlets that it can be used to charge cell phones or other portable electronics, or even power your laptop computer while you are on the go.

– The Electromate 400 is fairly small – 18″ by 8″ by 12″ – which makes it convenient enough to pack into your car or truck without taking up too much space.

– The jump-starter will indicate to you whether you have connected it in reverse to the battery terminals, and it will also provide a reading of the voltage being produced by the alternator post jump-start. This is in addition to its own battery-level gauge that indicates when the device needs to be recharged.

– Unlike many portable jump-starters, the Black & Decker can be plugged into any standard household extension cord, as it features an internal charger that does away with a standard brick adapter. It can even be charged on the road through the cigarette lighter of your vehicle.

– The air compressor is cheap. Hard to believe it will last very long.

– The batteries need re-charged regularly. If you let this thing sit for months at a time without a charge, it’s not going to give you much of anything when it’s “go time.” SO, you’ve got to plug it in before you take it out on your road trip/camping trip/visit to Grandma’s.

– 450 amps might not be enough. It’s going to depend on how dead your vehicle’s battery is, how cold it is outside, and how much charge the unit is holding. In other words, if the battery is really really dead, this thing might not deliver.

The low cost and small size of the Black & Decker VEC026BD Electromate 400 make it a fair value. However, it’s not a perfect device. The air compressor is of poor quality, and the battery pack isn’t quite powerful enough to jump a completely dead vehicle…your battery has to have a little juice in order for this to work.

Still, when considering the cheap insurance that such a device provides against being stuck in the middle of nowhere or waiting for an expensive tow truck service call, it’s clear that a portable jump-starter is a worthwhile accessory during the cold winter months, or for anyone who might get stranded far away from others (like campers, hunters, construction workers…anyone that uses a truck, basically).

Bottom Line: We like the idea, and Black and Decker’s Electromate 400 is a decent execution at a very reasonable price. We’d like to see them drop the air compressor and focus on more battery power, but it’s hard to argue with the value here. Between charging a dead cell-phone, jump-starting a vehicle, and acting as a remote 120V AC power source, it seems like a reasonable investment.