In our last Q & A post with Jack from Unichip, the ECU tuning specialists, he offered us some very interesting opinions on how engine modifications interact with air intakes and exhaust systems.  In this post, Jack blows open some of the myths that have accumulated around the idea that chip tuning can save money at the gas pump, as well as how the ECU’s engine management affects specific driving activities like towing or drag racing.

We asked Jack if Unichip tunes the Toyota Tundra to enhance full-throttle acceleration and top speed or if they geared more towards producing a torque curve that was better suited to towing and hauling. His answer surprised us. According to Jack, the engine in a truck has no idea whether it is pulling something, blasting down the quarter mile, or climbing rocks on the trail. All the motor cares about is how much air and fuel it needs at a given RPM to generate horsepower. As a result, Unichip’s ECU programming is designed to wring as much as possible from the engine when the pedal is pushed near or to the floor.

Jack’s candid response to our question made us realize that, in order to see a torque curve that’s programmed to favor racing or towing, it’s probably necessary to visit a dyno tuner who can design a custom tune . Unichip’s focus is on maximum power and drivability across all engine speeds, which means one their Unichip tuners works for all applications. 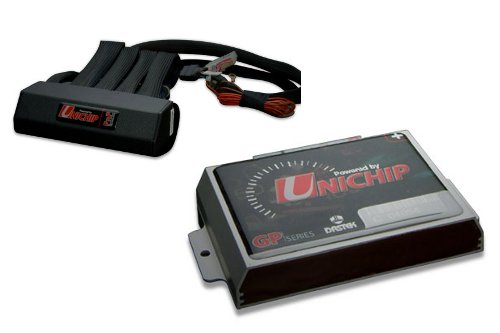 You'll never guess what Unichip told us about gas mileage...

Continuing our quest to get to the truth behind many of the claims made about chip tuning, we also asked Jack about the fuel mileage improvements that might be associated with installing a Unichip tuner. He told us that in the tuning business, gas mileage is a “frequently discussed and poorly understood performance measurement.” Essentially, fuel economy is largely a function of personal driving style, which leads some truck owners to report an improvement in mileage while others see their truck actually consume more gas despite using the same tune.

Jack said that Unichip makes no specific claims regarding the effects of its tunes on fuel mileage, but do provide an in-depth explanation of what owners can generally expect from its tunes on their website. In general, he says that:

[Jason’s Note: You’ve got to love a company that resists the temptation to make some sort of claim here…it would have been very easy for Jack to sell us a line here. Very admirable.]

The Unichip and Transmission Shift Points

As a follow-up, we asked Jack whether the Unichip tune had any effect on the Tundra transmission’s shift points.  He told us that while those running a Unichip map will see a difference in shifting due to the increase in power provided by the tune, the kit itself does not interact with the transmission in any way. Jack recommended investigating more direct transmission control devices for those looking to firm up the shifting of their automatic gearboxes.

The Question of Octane

Unichip provides a high octane fuel map with its tunes, and we were curious as to whether Jack could tell us exactly what octane rating they should use in their Tundras when running this particular configuration. He replied that the company is capable of offering “High Octane,” “Mid-Grade” and “Low Octane” performance maps, which translate into 92, 89 and 87 octane fuels respectively. The maps allow for a deviation of one octane point up or down with no issues.

He also said that Unichip offers products for the Toyota Tundra that can handle as many as five specific maps. The basic Unichip kit uses a mechanical switch that allows the owner to choose between two different maps. Upgraded kits offer a five-position switch, allowing for even more precision depending on fuel used and accessories that are “activated” (i.e. a setting for NOS).

Unichip also provides the option of a Bluetooth interface system called Flux which provides wireless access to as many as five maps.  Jack said that the company doesn’t charge more for additional maps, and that the only cost increase comes with purchasing the different equipment required for drivers to take advantage of the extra tuning configurations.

After hearing the truth about application-specific ECU tuning straight from the horse’s mouth, in addition to finding out the real story behind chip tuning and fuel economy, we had only a few questions remaining for Jack as we wrap up our Q & A session. In our fourth and final post we try to get to the bottom of how Unichip is able to interface with Toyota’s computer systems, and also ask Jack for his opinion regarding the upcoming “black box” legislation that will see data acquisition technology installed in every new automobile sold in the United States.

For some really in-depth info, check out Jack’s Unichip blog.