The details are coming fast and furious, but here’s what we know:

It’s rumored that there’s a 4-cylinder EcoBoost engine being considered for this lighter F150, but that seems unlikely. A smaller EcoBoost 2.7L V6 has been discussed for a while now (code named “nano”), and of course Ford will be unveiling some new styling and a bevy of luxury features on the new truck (as is the trend in the industry). But the big story is the extensive use of aluminum.

Let’s Give Ford Some Credit

Most automakers who have been forced to choose between true innovation and half-measures have chosen the latter. Rather than do something dramatic that makes sense (like reducing weight), they’ve opted for a short-cut. Why re-invent the pickup truck when you can just sell consumers on the values of a new twin turbo V6? Or a smart new engine computer that deactivates cylinders to save fuel? Or a fancy air suspension system that improves aerodynamics on the highway?

After all, these complex and relatively expensive systems can be sold as “features.” Even though these systems offer minimal value to the end-user (most trucks get about the same fuel economy with or without these systems), automakers love bolting more gizmos onto a cheap (and heavy) steel chassis. There’s a lot of profit in that approach. Well, except for Toyota, who seems to prefer the “none of the above” choice, making no meaningful effort to improve fuel economy (at least not yet). 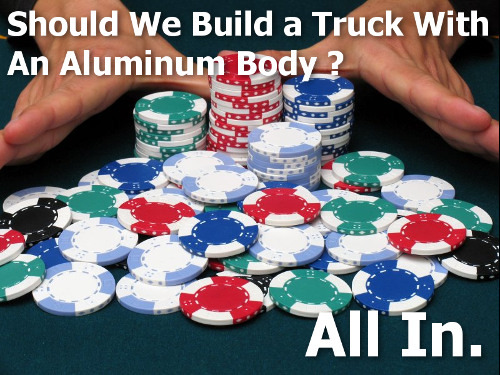 Ford has gone all-in with their decision to build an F150 with an aluminum body. Will consumers respond positively, or will quality problems drag down the brand?

Ford, on the other hand, has gone all-in. They’re putting their reputation on the line to build the most fuel-efficient full-size truck on the market. The trouble is, mixing aluminum and steel is tricky.

I’d argue that Ford’s F150 engineering teams are as good as any in the industry. The F150 is capable, affordable, and generally does quite well in various industry quality and durability studies. While Toyota’s Tundra tends to do a bit better in terms of quality and durability (as well as resale), Toyota can’t match the F150’s low cost and variety of options. I wouldn’t hesitate to recommend an F150 to anyone who didn’t like the Tundra.

Yet no amount of engineering talent can anticipate every problem. When you mix steel and aluminum alloy, you see:

And that bit about “standing up to the rigors of truck use” is really the key point. There are lots of all-aluminum vehicles on the road today, but they’re mostly sporty luxury cars. Is the owner of an all-aluminum SL550, for example, hauling a 10,000 pound trailer up a 6% grade? Hauling a heavy payload across the desert on a hot summer day? Plowing an alpine driveway in sub-zero weather? I’m willing to grant that all-aluminum sports cars and luxury sedans can be durable and reliable, but these vehicles are not beaten upon like your average truck.

What’s more, all aluminum vehicles don’t have nearly the corrosion risks that a steel and aluminum mix will face.

While Ford is using specially coated aluminum panels to prevent galvanic corrosion, self-piercing rivets to limit contamination during manufacture, considerable amounts of adhesive to ensure structural rigidity, etc., the simple fact is this: Ford is breaking new ground. While the end result is going to be very positive, unforeseen problems are likely to arise…especially in the first few model years.

But What About Testing? Ford Isn’t Stupid

Ford is not stupid. I’ve known a lot of Ford employees in my life, and the vast majority of them have been smart and capable. I’ve got nothing but respect for Ford’s engineering talent. You can bet that Ford is testing the hell out of the new aluminum F150. 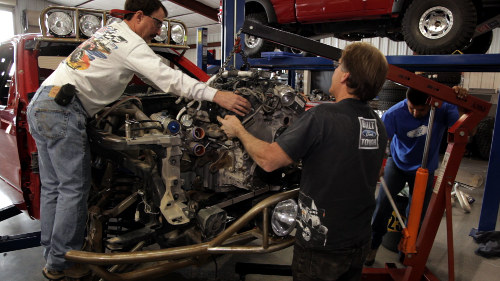 Ford tore-down a heavily tested EcoBoost motor at the 2009 Detroit Auto Show, the idea being to prove just how bulletproof the new EcoBoost engine would be. Four years later, we know that EcoBoost engines have had some significant problems.

Put another way, engineers can only test for the failure modes they anticipate. When you consider the inherent complexity of mixing aluminum and steel, and you consider all the wear and tear that trucks endure, it should be painfully obvious that the aluminum F150 will have problems. The only questions are “How many problems?” and “How bad will they be?”.

Ford is Paving the Way to The Future, But At What Cost?

Ford’s decision to be the first to build an aluminum truck will offer few benefits in the short term. While Ford will brag about 30mpg fuel economy, the first few years of the aluminum F150 will be ugly. I predict a litany of issues associated with corrosion, fit and finish, and manufacturing quality.

Meanwhile, GM, Toyota, Nissan, and Chrysler-Fiat will keep on building the same old steel trucks. While these competing trucks won’t get 30mpg, they’ll be affordable, capable, and incredibly reliable. GM, Ram, and Toyota won’t win any awards for innovation, but they will build trucks that are relatively problem-free.

Will Ford lose market share as a result of their decision to go aluminum? Perhaps. It certainly won’t take much for the Internet to over-react to aluminum F150 quality problems. A few YouTube videos depicting aluminum F150s with problems is all it will take to put a dent in Ford’s sales….imagine photos of an aluminum body panel that’s “exfoliating” due to galvanic action, like the image below. 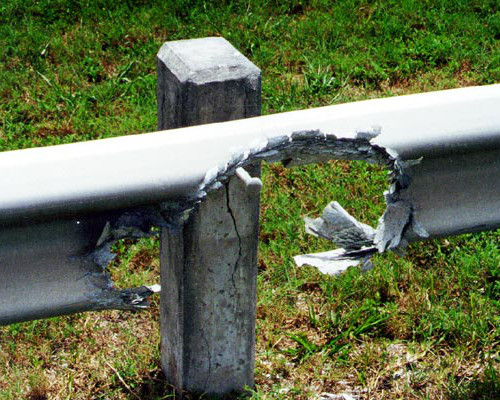 One type of galvanic corrosion, known as ‘exfoliation’, attacks this aluminum alloy guard rail. The corrosion was caused by a single steel bolt and mother nature.

Ford’s decision to jump head-first into infotainment with the MyFord Touch system is a great illustration of what will happen with the aluminum F150: Ford’s innovation will help to pave the way for the rest of industry, but it will also damage Ford’s relationship with countless consumers and hurt their quality ratings.