A recent study done on European cars has confirmed what we already knew, the disparity between advertised and real gas mileage has grown larger over the years. Surprised? 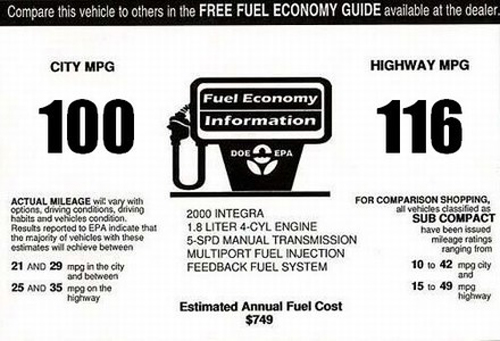 Do we all believe the advertised mileage stickers still? Nope, not really.

The European study collected information from around 28,000 users who entered their information into a fuel economy database. From this information, they determined that the disparity of advertised versus actual had grown from 8 percent in 2001 to 21 percent in 2012.

Why is Europe concerned with actual mileage? Besides finding out the truth for curiousity, Europe has been implementing greenhouse gas reduction targets for many years. The study looked at CO2 emission to help factor average fuel economy. The study used this factors to counteract what it calls a high tolerance for exploiting loopholes in fuel economy tests. These loopholes occur when automakers run their tests during incredibly optimistic conditions such as flat roads, cold-start testing and the air conditioning turned off. Tundra owners also know that tire size has a real impact on fuel economy.

While the study basically slams automakers, governments and the national road test standards as not being adequate enough for real world testing conditions, there isn’t a direct solution coming out of it.

Interestingly this study’s release is occurring during a time when many automakers are in court defending their claims. One of the most interesting ones is the Honda Civic owner Heather Peters winning a small claims case against Honda. That case is still in litigation.

Besides lawsuits, the rising gas prices are bringing the advertised mpg under increased scrutiny.

What do you think? Are automakers trying to deceive us or is this a larger problem that the government needs to step in to revise the testing?