If you are a regular fan of this site, you may be wondering where I have been. Besides waging war on a nasty cold, I’ve been in Texas y’all. Why Texas? I attended probably the greatest truck competition in the country.

For two days, this was the scene in the morning from the mess hall.

For 2 days, nearly 70 journalists had the unique opportunity to drive more than 91 vehicles. A great majority of these were trucks as well as commercial vans and SUVs. While, I drove a great many different vehicles in the van and SUV category, I’ll keep this focused on my experiences with trucks. 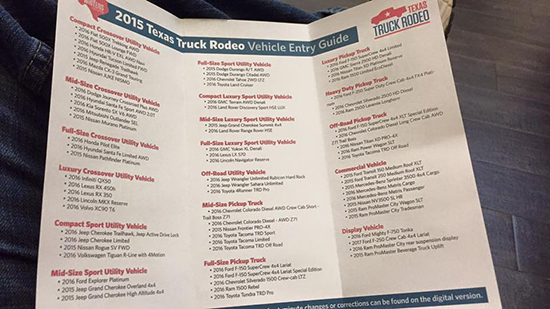 My task was to evaluate and rank each vehicle on exterior, interior, performance and value in its class. A tall order for sure!

Before I get each manufacture, let me give you a little history on the Truck Rodeo. About 30 years ago, a group of journalists got together to form the event. These journalists from the Texas Auto Writer’s Association built this event from a small gathering into an event which bestows a big award – the Truck of Texas. Although, there are individual winners by category, the Truck of Texas award is the most important since it is awarded by Texas journalists (myself and a few others excluded). It also is the top award for the state known as the full-size truck capital of the award. Winning a Texas truck award in Texas is a big stamp of approval. 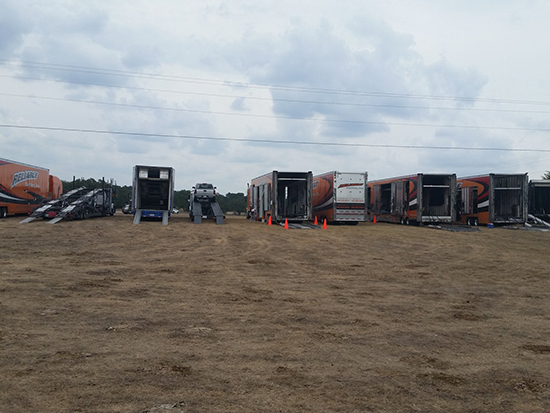 As you can imagine, it took a lot of coordination to make this event come together.

At the bottom of this article is a full list of the winners by category.

Lastly, the driving event was at a historic Texas ranch, Knibbe Ranch, and included a somewhat rigorous off-road section as well as on-road driving including interstate speeds. Each loop took about 10 minutes and, in most cases, there was a product representative with you. In fact, each manufacture brought in a good variety of people including chief engineers, marketing and communications staff. For the big ones – Toyota, Ram, Ford, Chevy, Nissan, there were literally teams of 20 or better. 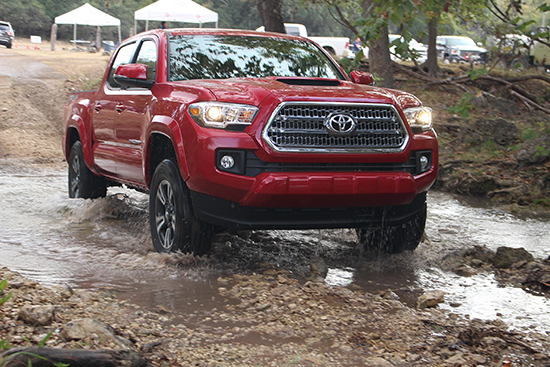 While at the event, I had the chance to once again put the Tacoma through the paces.

Let’s start off with Toyota since this is what this site is focused on and there products are what I know best. For the truck rodeo, Toyota brought a big selection of their new Tacoma pickups and a few TRD Pro Tundra trucks. While both trucks were available to journalists to drive, the focus was clearly on the new Tacoma with Chief Engineer Mike Sweers riding shotgun on many of the drives. He was doing his best to showcase the vehicle and get journalists to drive it. As you can imagine, with the amount of vehicles and manufacture teams, it turned into a competition of getting journalists in the driving seat.

For my drive, I did indeed drive with Sweers on the off-road course. The funny part is I was actually walking over to drive the Chevy Colorado diesel, a truck I hadn’t been in before, and got “caught” by the Toyota staff!

How did the Toyota do? Awesome of course. It is really built for the off-road course and did a fantastic job of handling all the loose rock, water crossing and big drops. 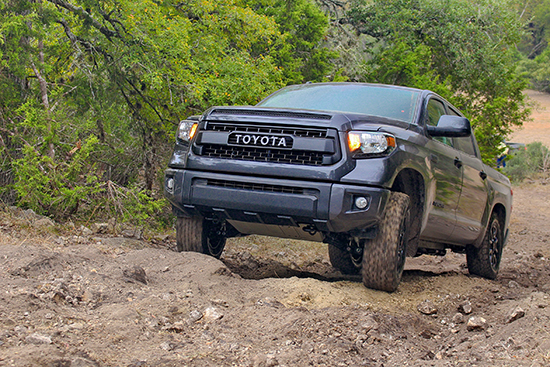 Several Tundra TRD Pros were available to drive at the event and I got to ride shotgun for one trip around. Fun to see how other people respond to the truck.

The better part of the drive was chatting again with Sweers. One of the best parts of doing this job for as long as I have is I have developed a relationship with him. I give him flack over the lack of USB outlets in the rear of the Tacoma and he gives me flack about how he thought the new seats in the Tundra were a great idea until critics (like myself) took him to task over it. I also get to ask him the “tough” questions like if he is tired of talking about fuel economy (he’s not).

Overall, the Toyota Tacoma won the mid-size truck category besting the Chevy Colorado diesel and a Nissan Frontier. Also, the truck finished 2nd in the Truck of Texas voting by tying the F-150. I would argue the tie for second is the BIG deal from these awards. Why? You have to understand the group of journalists (Texas full-size truck fans) and the state of Texas itself. For example, many journalists struggle with a mid-size truck as being a “Texas truck” as well as the lack of interior “wow” features. Simply put, people want a fancy interior and the Tacoma’s greatest strength is in its capability. 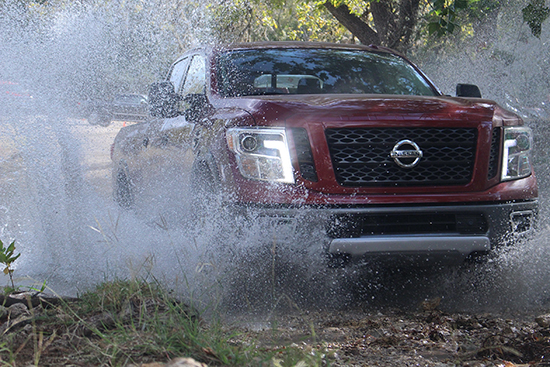 The 2016 Nissan Titan XD made quite the splash at the event.

Again, let’s jump out of alphabetical order and talk about the Nissan Titan XD next. If you haven’t heard, this truck took home the coveted Truck of Texas award. This was a BIG win for them and a first for Nissan as a company. It was a joyous celebration dinner after the victory and many OEMs left disappointed to lose to this truck.

While I can’t talk about driving impressions of the truck since I am under embargo on that until mid-November, I can say it is quite a truck. The engineers have done a good job of incorporating smart features from their competitors and putting their own stamp on them.

Nissan still has some work to do on it and I believe they will take our feedback back to the team. 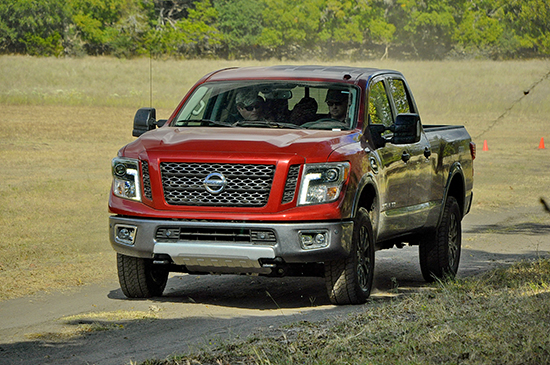 Here I am driving this truck with Nissan’s Dan Passe who is their senior manager, product communications.

One last note, if you doubt how important the Truck of Texas award is consider Nissan’s efforts. For starters, the trucks they sent were straight from their proving grounds and they were literally tightening screws the day before they shipped it. Also, they flew in one of their top executives, Fred Diaz, to personally talk with journalists during the event. Diaz is from Texas (crazy story – his family had a house on the same ground which what would become the Toyota San Antonio plant) and really did his best to be charming and available. They also had a full court press with nearly everyone from their marketing and communications offices to get journalists in the truck. Also, they provided a walk around with one of the engineers. Finally, the journalists at the event are the only ones who have ever driven the truck. All other events and major publications have to wait to drive it. In sum, getting the honor being the first to drive the truck, seeing Nissan’s commitment to getting the truck at the event, flying in a top executive and building a good product were all key factors in winning the award. You could argue that nothing but the truck matters, yet we are all human. These bonuses add up.

Another group of hot trucks were both the Chevy Colorado diesel and the Chevy Silverado. I was really excited to get behind both and really see what is new. 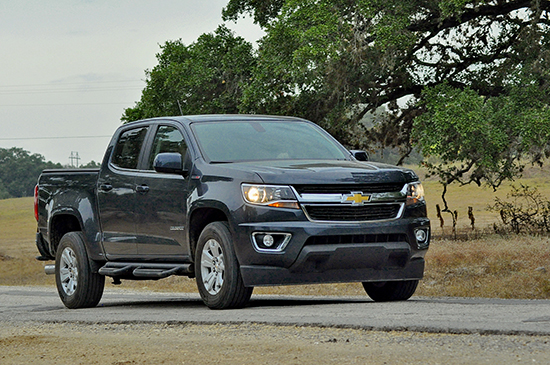 The baby Duramax in the 2016 Chevy Colorado gives it a lot more punch and is a lot more fun to drive.

Starting with the Chevy Colorado diesel, I could talk about a variety of mechanical factors of the 2.8L baby Duramax, but let me be brief. This powertrain gives it the “wow” factor. It has that EcoBoost acceleration feeling without any compromise in towing – 7,700 lbs capacity is pretty impressive in the small truck. 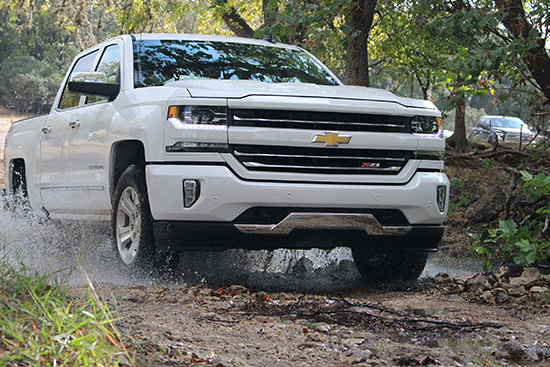 The styling of this 2016 Chevy Silverado is a bit off-putting to me. I think I need to see it in a few different colors.

The 2016 Chevy Silverado, on the other hand, didn’t give me a “wow” feeling. I’m pretty mixed on the new look and the interior is still just OK. I really look forward to spending more time behind the wheel and really getting to know it better. As it stands right now, it is just OK to me.

Shockingly, both the Chevy and the GMC trucks, including the heavy duty ones, were shut out in the awards. I thought they would at least take home one win. 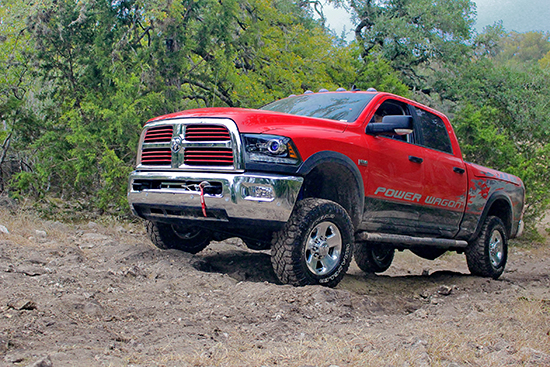 While I didn’t get any seat time in the Power Wagon at this event, I have at other events. Whether you like Ram or not, you have to give them credit. The Power Wagon is just incredible.

Why did they win both? I think it comes down to interiors. The Ram Rebel mechanically isn’t really that superior, but the interior is really good. The same can be said for the heavy-duty trucks.

Look all trucks these days are about the same on paper via towing, payload and fuel economy. If you want to stand out, it has to be in styling. This is where Ram wins.

Rounding out my list is Ford. I spent an entire morning with the brand driving two of their trucks including trying out backup assist. Also, I drove their vans and drove two different Lincoln SUVs. 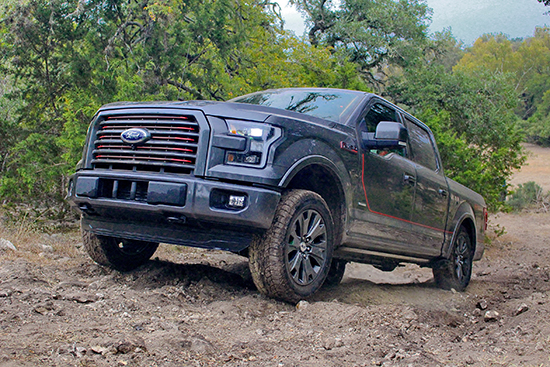 Overall, I was pretty impressed with this Ford truck.

Frankly, I spent this much time with Ford because they are my “unicorn.” Out of all the truck makers, I know the least about their products and don’t really get much time behind the wheel. This is due to a combination of factors that Ford and I are working on changing.

With the amount of time I spent with them, I really got to see how focused they are on strength and capability. The F-350 is a beast of a truck and is designed to take a beating. Also, I drove a FX-4 off-road and it is pretty dang capable.

Overall, I really am hoping for more time with Ford to better understand their direction and products.

The 2015 award categories and winning vehicles were: