Several sources are a buzz this week with rumors that Ford is planning to upstage GM by bringing a prototype of the 2015 Ford F-150 to the 2013 Detroit Auto Show. The battle for pickup sales just got ratcheted up. 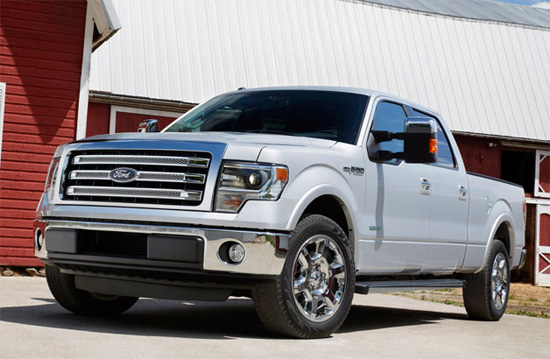 A Ford source has told the news agency Reuters that Ford is planning on bringing the 2015 Ford F-150 to the auto show in hopes of stealing GM’s spotlight from its new trucks.

According to a story in Automotive News, Ford is “pursuing a different strategy” than GM. The feeling is that GM is pushing the power and torque, quieter cab and additional safety features. While Ford is all about increased fuel economy. It is planning on the 2015 Ford F-150 to gain up to 3 miles per gallon more. This would put its EPA estimates at 23-26 mpg depending on model and engine.

Ford plans to dump 700-800 pounds of weight off the truck. This will probably be accomplished much the same way GM did with more aluminum and lighter brakes and axles.

There is also a rumor that Ford is developing a new engine code named “Nano.” This engine will be a 2.9-liter v-6 most likely with EcoBoost.  The plan is for the engine to appear in 2016 or later. A lighter weight, fuel efficient engine with turboboosters could be quite the competitive edge for Ford.

Along with the new engine coming out, the plan is for all F-series trucks to offer an eight-speed transmission in 2014 or 2015.  Again, this move is aimed at creating a more fuel efficient truck.

Seemingly lost in all of this news is Toyota. The new Tundra is set to debut in Chicago and most everyone is in the dark about what it will be like. While many forums and comments on this site have indicated not much will change, that remains to be seen. Remember that Ford is working with Toyota to develop a new family of hybrid gasoline-electric engines. And there has been some recent chatter about Toyota moving toward building a 3/4 to 1-ton HD version with diesel. Again rumors a plenty.

Where do you stand? Is it all about the fuel economy or about torque/power, quietness and quality of the ride?