At the media preview event, I was able to log around 100 miles on the new 2014 Toyota Tundra. Here is what I found. 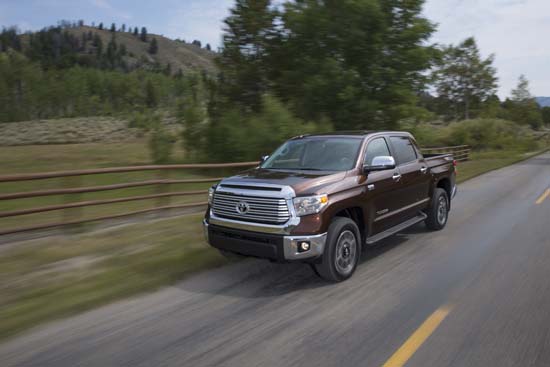 Cruising around in the 2014 and you will notice a subtle, yet improved difference.

Officially Toyota has done several things like the addition of aero fins or “vortex generators.” They also improved the suspensions by:

As many of you know, I currently drive a 2013 Tundra and have put many miles in it already. While I had a short ride with the new truck (I’m hoping for a longer one down the road), I did find it to be an improvement over the previous model.

My driving experience can be summed up with the word “solid.” I don’t mean clunky by any means, I mean the truck feels more smooth and is more responsive. Also, they have really improved the drive on-center ability of the truck and I could relax my hands while driving down a straight road. The truck simply stayed “on line” longer which is a big deal for long road trips. I meet one of the their test drivers and a Baja driver extraordinaire Joe Bacal. We had a great conversation about how much staying on line is important for driver comfort. He shared many stories including spending obscene amounts of time on the test track to make this happen.

These little pieces of plastic matter like shark fins on other models. Don’t try to sand them off, keep them and enjoy the ride.

Another big item for me and Bacal is the aero fins (Mr. Sweers term) or “vortex generators” (marketing’s term). It is simply incredible how much they matter and I have thoughts on how to adapt my 2013 with them! Bacal shared the story on the shark fin addition that is commonly found on other Toyota models. While, most buyers overlook this small item, Toyota doesn’t. They spend lots of time getting the ideal height for these features. Bacal said even adding less an inch of height either way, really impacts the driver experience.

They work by creating more air “disturbance” along the side and downforce on the rear. It is all aimed and reducing the bed bounce of a light-duty truck. Trust me, don’t miss the importance of these aero fins. They matter.

All in all, the truck is a pleasant drive and is an improvement over previous generations. Is it enough to surpass the improved rides from Ram and GM? Time will tell.