Most of our featured Tundras are street rides with some custom extras. Lately, however, we’ve been featuring Tundras that are more show trucks than street rides. Mark (aka LowRiderMan) has an 08′ Tundra Double Cab that is most definitely a show truck. When it comes to shows, there’s not much importance on “function” per se – the mods are for show.

Check it out – and enjoy the craftsmanship and creativity. This isn’t so much a truck as it is an artwork. 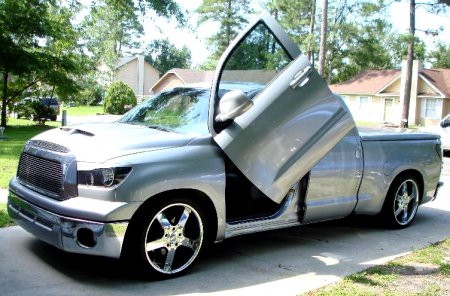 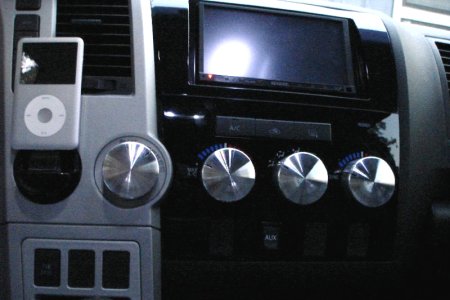 There’s also a set of Putco Billet pedals and a specially modified Momo Evo F-16 shift knob. Mark has had the lower 2.25″ of the shift knob cut off to give it a much lower/better look. 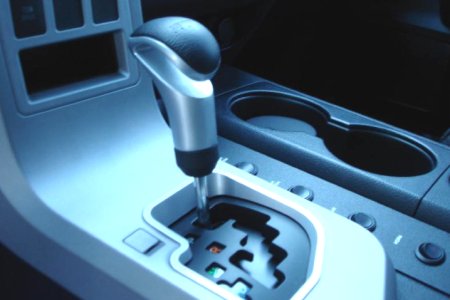 This is a modified Momo F16 shift knob. Very sharp.

The center console has been covered in custom embroidered leather with over 100,000 stitches of thread, and the rest of the interior has after-market seat leather.

Fiberglassed 11″ monitor custom-molded into the top glove box area. Below the screen (where the other glove box would be), there are two Xbox controllers sitting in their own suede upholstered holders. Of course, the holders are back-lit (red lighting). 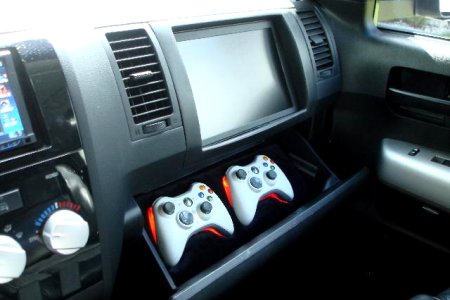 Kenwood DNX7120 deck along with Kenwood Amps on the bass and highs. A single 12″ Rockford Fosgate shallow-mount PS3D212 sub woofer rests in a custom-built 2 cubic feet box underneath the rear seat. All Alpine and Infinity speakers for highs.

Where there are Xbox controllers, there’s an Xbox. TunDrop has an Xbox 360 installed behind the center console on the rear floor.

If your friends are hogging the controllers, you can watch the game play on the two headrest monitors and (1) 16″ flip-down monitor mounted for view in the rear seat. 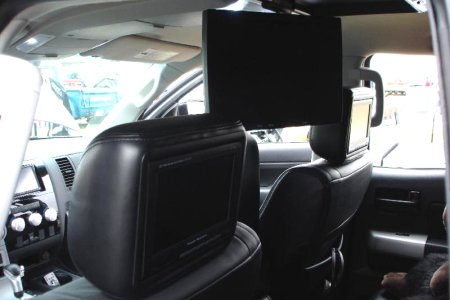 This truck has a total of eight screens.

There are also two 12.2″ monitors mounted in the sun visors up front…and a 20″ flip-down screen in the bed (it’s mounted to the bottom of the tonneau). There’s also a scrolling LED sign back there (just for fun). 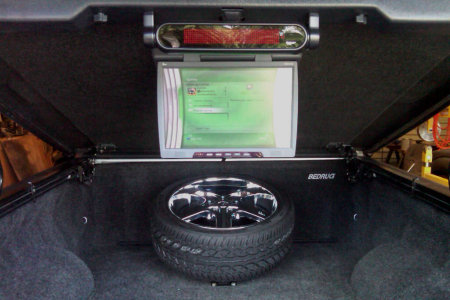 Even the truck bed has a screen.

Basically, this thing has more screens than a TV store.

There are 4 Hornblasters train horns – 2 in the engine bay and 2 in front of the radiator. To feed all these train horns, there are 2 air tanks (one on each side of the truck).

The engine cover and fuse box cover have been airbrushed and they look kick-ass. Vertical Door Kit By Vertical Doors, Inc. Vanity Plate. Custom Made Mount For Wheel Mounted In Bed. 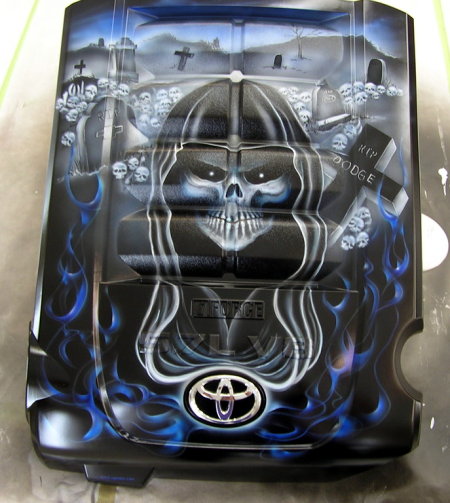 Check out the intricately airbrushed engine cover on this Tundra. 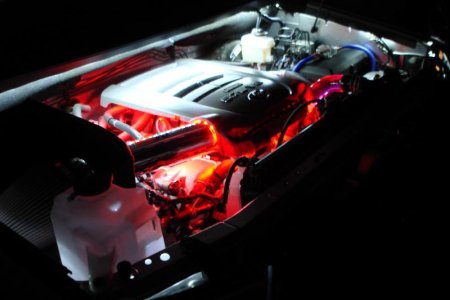 Red lava coolant and LED lighting give this engine compartment an eerie glow.

Finally, to wrap things up, there’s a K&N 77 series cold air intake under the hood too.

To start with, Mark de-badged all the emblems and the TRD decals on this truck within hours of taking delivery. Then he installed color-keyed Sequoia door handles. The tailgate handle has also been color-matched.

Up front there’s a Ram air hood, and just below the TunDrop has all three Carriage Works billet grilles installed (upper and lower valances plus the grille). The front bumper has been painted-to-match too – along with the side mirror caps. 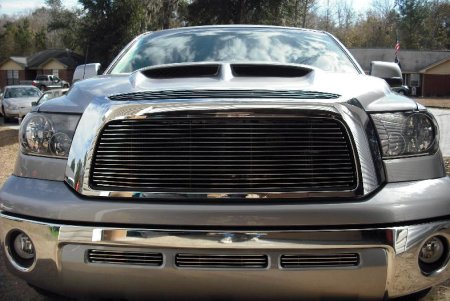 Carriage works grilles, ram air hood, and much, much more. 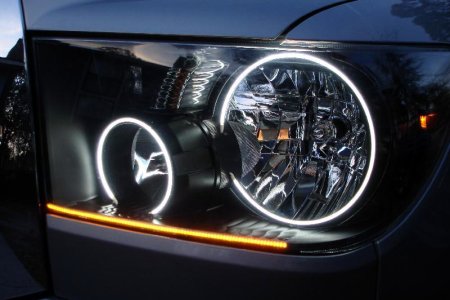 There are turn signals in side mirrors and custom-made front and rear billet door sills, and of course a nice dark window tint. Then there’s the “Lambo” style vertical doors…

In back this truck has a Leer 800 low-profile tonneau and a bed rug installed (plus a custom mount for the spare 22″). There’s also an LED 3rd brake light on the back of the cab. Be sure to check out the blacked-out custom tail-light lenses with no humps on the sides of the lights. 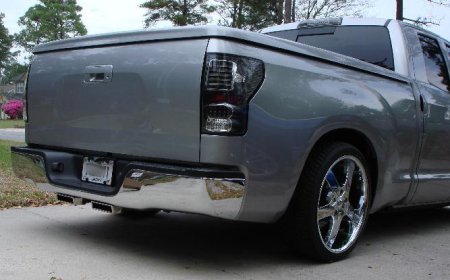 One of a kind tail light lenses plus a nice view of the rims and the lowering kit.

Finally, to give the truck the mean, low to the ground look, it has a 4/6 Mcgaughys drop kit with 22″ wheels wearing 265/35/22 Yokohama’s. Don’t miss the blue painted brake calipers.

As if all of this wasn’t enough, here’s a list of upcoming modifications:

When you add it all up, there are two likely reactions that people will have to this truck. One is pure, unadulterated excitement (that’s us). The other is pure, unadulterated jealousy. When the jealous people start to say “Well, this truck is nice but…”, Mark says “They’re just jealous that my Tundra has pulled more kitty’s than a bowl of milk.” 🙂

Mark would like us to give props to FXCustumz and the owner Billy. Billy is the instrumental man behind installing most of Mark’s ideas for mods which makes them come to life.

The official show poster of TunDrop