This is the third and final part of our comparison series Toyota Tundra vs Chevy Silverado GMC Sierra (read part one and part two). In this segment, we�re going to compare the two trucks in terms of ride, handling, and comfort. Just like before, we�re focused on the aspects of the trucks that are most important to a typical non-commercial user. As always, any comments (good or otherwise) are welcome. 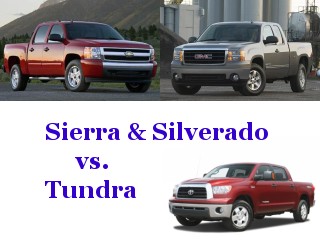 GM offers a “smooth” suspension on their base model trucks, and a 1500 LS1 we drove easily rode better than the Tundra. Unfortunately, that smooth-riding suspension isn’t available on the 6.0L GM trucks with the heavy duty trailering/hauling suspension. It’s difficult to compare the suspension on a 5.7L Tundra capable of towing 10k+ lbs to the suspension of a 5.3L Sierra/Silverado capable of hauling at most 8,500 lbs. When we ride in the 6.0L, the difference is hard to detect. As we’ve said time and again, ride quality should be one of the least important factors when buying a truck. That’s not to say that ride isn’t important – it’s just that empty trucks that aren’t hauling or towing don’t tend to ride very well at all (at least when compared to a car or luxury SUV).

People often use skid-pad and slalom tests to determine objectively just how well a vehicle handles. Unfortunately, these tests have little to do with real-world truck use. Edmunds.com tested both a 2007 Tundra and a 2007 Silverado and found them to be nearly equivalent. The Tundra had a 0.69 g rating on the skidpad, the Sierra a 0.71. Slalom tests were about 55mph for the Tundra and 57mph for the Sierra, but the tester stated he/she wasn’t able to get the Tundra’s VSC system turned off, so the actual results are probably better. Turning radius is another statistic that is often compared, and the Tundra needs 44 ft to turn around, the Silverado 47 ft. No significant differences between the stats.

Driving the two trucks, the Silverado-Sierra handles quite well. Again, the 5.3 LS and the 5.3 LE, both with the smooth suspension, out-rode and out-handled the Tundra. Comparing the 6.0L GM trucks, the GMs still seem to handle a little more smoothly. Perhaps it’s the Tundra’s too-powerful steering assist, or perhaps its the fact that the GMs are a little lower to the ground, but we really liked the feel of the GM trucks. They handle quite nicely.

WINNER: GM. Handing feels better on the Sierra-Silverado than on the Tundra, even though all the statistics indicate they handle the same.

We understand that a lot of people out their think the �comfort� comparison is pointless�after all, you�re buying a truck right? We decided this time that we’d compare the interior of a fully-loaded Tundra CrewMax to a GMC Sierra SLT (arguably, the nicest half-ton made by GM). They both had rear DVDs, navigation, sunroofs, etc. Sitting in the front seats, the GMC felt nicer and more luxurious. Sitting in the backseat, the Tundra was roomier and definitely nicer. We’ll call it a tie, but the difference between the GM’s backseat and the Tundra’s backseat was pretty significant.

The seats themselves aren’t too different. Everyone fits in vehicles differently, but we managed to get comfortable in both trucks. One of us is 6’4″ and 260lbs, the other is 5’9″ and 180lbs, so we figure just about everyone will find a good place. Having said that, the Toyota is more comfortable the bigger you are – the seats are just bigger and wider, and the lumbar feels better too.

WINNER: GM. The two are awfully close, so close we’d call it a tie. By rule, a tie goes to the older design.

One of the great things about today’s truck market is that there are no bad trucks…every option available (Ford, Dodge, Chevy/GMC, and Nissan) is excellent. When comparing the vehicles, it’s usually difficult to find a clear winner. Every vehicle does one thing better than everyone else. For instance, if you’re looking for a truck that rides and handles well, is affordable, offers 20mpg fuel economy, and if you don’t mind being a little slower and less powerful than some other trucks, a case can be made for the 5.3L Silverado or Sierra. On the other hand, if you need a truck that can haul and tow with the best of them, while still offering great quality and average or above-average ride, handling, interior, safety, etc., than the Tundra is the way to go. Not to mention Tundra’s $1000+ pricing advantage (which is significant).

Considering the Tundra easily beat out the Sierra-Silverado in terms of engine, transmission, brakes, safety, and pricing, narrowly beat the Sierra-Silverado in interior and exterior features, and tied or narrowly lost on the rest, the Tundra is the winner. The Tundra represents a better compromise of everything we measured in our comparison. Assuming you could only have one truck, and assuming you had a need for one with power, the Tundra is the way to go. GM needs to offer more than a 4speed automatic, upgrade their safety systems, and reduce their costs in order to pull ahead of the Toyota product.