Over the last few weeks, PickupTrucks.com has published both 2012 half-ton retail sales figures and 2012 total half-ton sales, which gives us the data we need to talk about “fleet mix,” or the percentage of trucks that Ford, GM, Ram-Fiat, Toyota, and Nissan sell to fleets.

These numbers show that Ford is the king of fleet sales, and that Toyota doesn’t depend on fleet transactions nearly as much as the rest of the truck manufacturers listed.

Why does this matter? Because fleet sales should never be compared to retail sales, as a fleet buyer has very little in common with a retail buyer (more on that below). Yet despite this inequality between a fleet buyer and a retail buyer, Ford, GM, and Ram-Fiat are never shy about quoting total sales numbers (which include fleet) and then using these numbers to brag about their “increased share.”

Specifically, if we look at retail numbers only, Toyota’s share of the retail half-ton truck market is about 9.5%, and that number is only going to grow as the 2014 model hits the street.

Whenever a new model hits the ground, sales improve. Both Toyota and GM are bringing new trucks to the market this year, so they should both see growth from the numbers below (graphic borrowed from PickupTrucks.com). 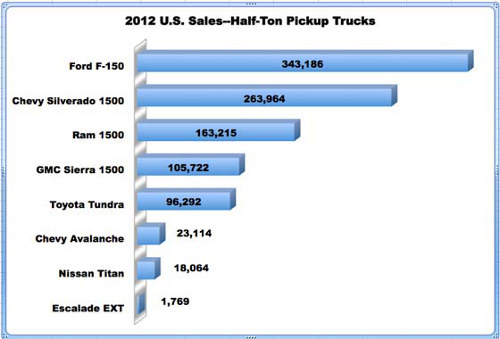 2012 Half-ton sales – RETAIL only. Image from PickupTrucks.com (click to see the original)

Ram, on the other hand, is on the wrong side of the new model launch curve. Instead of selling the hell out of their new truck with lots of new features, they’re spinning their wheels trying to overcome production issues (including workers sabotaging new trucks, if you can believe it). Ram still hasn’t delivered trucks with the new Pentastar V6 (at least not in volume), their air suspension system isn’t available yet, etc.

If you launch a new truck but can’t get it to market before GM and Toyota launch their new trucks, than you’ve squandered your opportunity. Therefore, I don’t see Ram sales growing in 2013 at a rate any better than the rest of the industry. In fact, we may see them underachieve (which, incidentally, is what the early figures are showing, as Ram sales are only up 8% compared to 20% for the rest of the industry).

Then we have GMC. The sales gap between the GMC and the Tundra is very close, and the Tundra is 2-3 good sales months away from tying GMC sales. That would be historic (only, admittedly, sales figures really don’t matter, so this is all about bragging rights).

Fleet buyers care about one thing: cost. How much does the truck cost today, how much will it cost tomorrow, etc. When fleet purchasers evaluate pickups, they look at a handful of costs and concerns:

As I wrote a couple of years ago, the math works out in such a way that it’s really the total up-front cost that drives fleet sales, as operating costs are roughly equivalent from one model to the next, and resale value isn’t really important to buyers who drive their trucks into the ground.

Good commercial financing (like the programs offered by Ford Motor Credit) can also help promote fleet sales, as they can reduce the cash flow hit that business must take when they invest in new equipment.

The point? When you hear a Ford or GM fan tell you about how many trucks their favorite company sells, you can explain that a big chunk of those sales are the cheapest trucks on the planet, and that anyone can get that fleet business…they just have to be cheap enough.

Kudos to Ford, GM, and Ram-Fiat for making their trucks so cheaply.