Great news! One of our readers, Matthew Davis, has come up with a way to dampen and CURE the Tundra’s bed bounce cheaply and simply — check out his full explanation and PICTURES below:

Hello everyone. I am the owner of a 2007 Tundra double cab 4X4 with the 5.7 engine. I have noticed the bed vibration since shortly after purchasing the truck in July. I had some time on my hands the other day, so I got up under the truck to see if I could identify the source of the vibration. Those of you who own this truck can go and grab the rear bumper and shake it up and down vigorously and you will observe independent motions of the bed and the cab. I began to realize that the frame of this truck has a harmonic frequency with a pivot point between the engine/transmission area and the rear axle area of the frame. (Visualize a guitar string.) You can get into the bed of the truck and stand directly over the rear axle and jump up and down, and you will find that it is almost impossible to make the same vibration that you can easily achieve by applying pulsating pressure to the bumper or open tailgate.

I thought about the idea of attaching some sort of weight to the rear bumper area, but as I considered the idea, I realized that this would only change the frequency of the vibration, but would not necessarily dampen it. It might even make the vibration more intense in the cab. So I thought about the idea of somehow canceling out the harmonics of the frame by creating a dampening device with a slightly different harmonic frequency attached to the area of the frame behind the rear axle as close to the bumper as possible. The logic here is that if you could CAUSE the frame to vibrate from this point, then it should be possible to DAMPEN the vibration from the same point.

I decided to use the spare tire for this purpose so as not to increase the weight of the vehicle. I lowered the spare tire a few inches from the frame, and I cut out two pieces of high density rubber foam and placed them in between the tire and the part of the frame that the tire is pressed against. (I used one of those kneeling pads that you use for working on hard surfaces on your knees.) 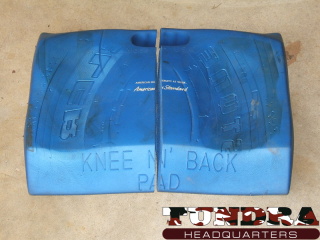 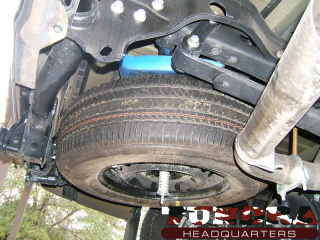 There are four points at which the tire contacts the frame. I placed the foam on the rear points and let the front portion of the tire remain in its original position against the brackets that prevent the tire from moving forward. I then re-tightened the tire to where the foam was snug between the tire and the frame. (The tire should be tight enough that it does not rattle.) The tire holder at the end of the cable is spring loaded so it will accommodate some slight movement. This setup allowed the tire to