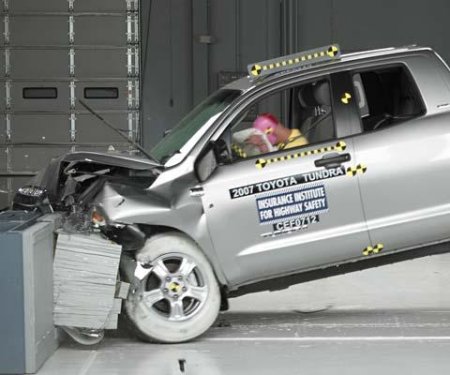 Evidently, (no one at Toyota could confirm this but everyone we spoke to said there were no changes) the 2010 Tundra is the same truck structurally as the 2007 Tundra. No significant frame changes have occurred since 2007 (at least that anyone is aware of). There were no changes anywhere really, other than the addition of a knee airbag and some exterior add-ons.

Could a knee airbag account for the change from a 4 star rating to a 5 star rating? Perhaps. Only it’s worth pointing out that NHTSA literature (pdf) states that the star rating “indicates a belted person’s chances of incurring a serious head and chest injury in the event of a crash.”

Hard to see how a knee airbag would help to prevent a head and/or chest injury…which is why we say WTF NHTSA?!

Possible explanations for these inconsistent results:

Of all of these possible explanations, the most likely is the first one. Still, that explanation doesn’t jive with the IIHS “Top Pick” safetfy rating.

Clearly, something is screwed up somewhere. NHTSA, we’re looking in your direction…

[Shout out to Mike Levine at PickupTrucks.com for bringing this to light first.]