Corrosion is a concern for any owner of the Toyota Tundra who happens to live in the Rust Belt – that grouping of states in which heavy winter salt use combined with prolonged exposure to moisture can make a mess of steel body panels, frames and suspension components. One of the technologies that is used to fight against encroaching rust is electrocoating or e-coating, a process which while prevalent is not always prominent in the minds of truck owners.

Toyota’s e-coating for the Tundra is handled by MetoKote. MetoKote’s San Antonio facility is dedicated to the Toyota Tundra, and the company is the first of its kind in the United States to achieve Tier One status with Toyota as a supplier. I was able to get in touch with Michael Cooper, Director of Asia Pacific Business Development for MetoKote, who along with several of his colleagues explained e-coating and the company’s role in the Toyota world. 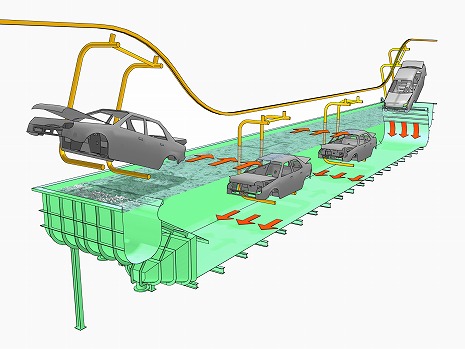 A simplified view of the typical e-coating application process.

How Does It Work?

Essentially, e-coating is the term used to describe the protective anti-corrosive coating that is applied to a wide range of components installed on the Tundra, including the frame and body parts such as window frames. In some cases e-coating is designed to be painted over or sealed with a second layer of protectant, but on the frame itself it serves as the first and only line of defense against rust. The protective sealant itself is applied using an electric current to deposit the material on the metal – hence the term “e-coat” – and it requires a completely clean and prepped metal surface in order to be effective, along with a baking stage that heats treated components up to temperatures of 375 degrees F.

E-coating is recognized as one of the most environmentally-friendly coating technologies out there today, with a near 100 percent utilization rate meaning that almost none of the protectant is wasted during application. The modern electrocoating process has also become very adept at managing harmful emissions, with a very low level of volatile organic compounds being released during coating as compared to other anti-corrosion options. E-coating is especially useful when providing complete coverage of complex components, which makes it appealing for use on a long list of automotive parts.

MetoKote isn’t just involved in protecting the Tundra from the nastier effects of salt and snow, but it also has a hand in coating at least a percentage of every Toyota vehicle that is produced in North America. MetoKote is proud of its partnership with Toyota and its role in bringing high quality cars and trucks to market.