In case you missed it, yesterday GM’s crack marketing team announced a series of extra incentives on new GM products for anyone that owns a Toyota. This announcement is in direct response to Toyota’s accelerator mechanism recall and subsequent sales freeze on 8 models. According to GM’s announcement, they “decided to make this offer after receiving many emails and calls from our dealers, who have been approached by Toyota customers asking for help. We want to be able to provide peace of mind to customers and all of our vehicles are safe.”

Isn’t that nice – GM wants to help Toyota owners in the name of safety. 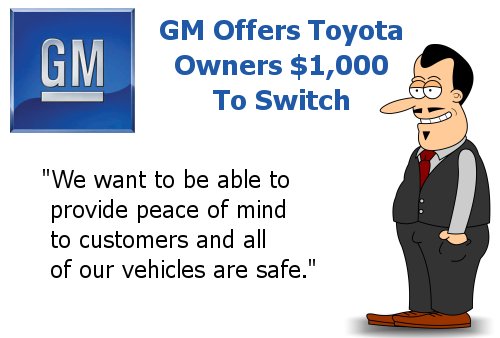 GM will be offering anyone who brings in a Toyota an extra $1,000 cash rebate and/or zero percent financing on a new GM product. While this incentive might seem shrewd to some, the full analysis shows that this could be a very dumb move. Here’s why:

1. First and foremost, this looks like ambulance chasing. Profiting from the misery of others often leaves a bad taste in people’s mouths. If you’re a fan of GM, you might not see this negatively. If you’re a fan of Toyota, however, you may see this is an insult. Whether or not the general public sees this as positive or negative is to-be-determined, but GM risks antagonizing potential buyers with this move.

2. What are GM dealers going to do with the Toyotas they take on trade? Toyota isn’t allowing their dealers to sell any models in the recall – new or used. Since GM is claiming to offer this incentive in the interests of safety and “helping customers,” it’s hard to image that GM dealers will be able to turn around and sell their trade-ins until Toyota repairs them. That could be a few days, or it could be a few weeks. In the meantime, GM dealers have to sit on these cars and hope they don’t depreciate. Which means…

3. Many GM dealers aren’t going to offer Toyota customers fair trade-in value. Since GM’s dealers aren’t going to be able to sell any of the Toyotas they take-in on trade, they’re not going to “want” them very much. Therefore, Toyota customers who try to take advantage of GM’s offer are going to be frustrated when the local GM dealer won’t offer book value on trade. While this will undoubtedly hurt Toyota’s image in their owner’s eyes, people have a tendency to “kill the messenger” who brings them bad news. The bottom line is that GM’s $1000 cash incentive isn’t going to look all that generous when the local Chevy dealership is offering $3,000 less than book.

4. Most late-model car owners are upside down. It’s a fact of the car business – anyone who has bought a vehicle in the last 2 or 3 years typically owes more on the vehicle than it’s worth. When someone tries to trade in a car they’re upside-down in, they either need cash to put down, they need to buy a lesser vehicle, or they must accept a higher payment. Since most people don’t like down payments, you can bet that trading in a Toyota for a GM will either cost more per month or result in a lesser vehicle.

Put another way, telling a Toyota Avalon owner that they need to buy a Cobalt to keep the same payment probably isn’t going to work.

5. GM is undermining their “May The Best Car Win” ad campaign. If GM is confident that they’ve got the best vehicles, why are they paying Toyota customers to make the switch? GM says this incentive is designed to “help” Toyota customers, but will consumers believe that?

6. GM is wasting money on an incentive they didn’t need. Any Toyota consumers who are mad enough to get rid of their Toyota might have visited the GM dealership anyways. Why pay $1,000 for sales you might have made without offering a discount?

7. GM is counting on Toyota to fix this problem fast. The best-case scenario for GM is that Toyota is able to fix all of their cars in the next few weeks. That way, GM dealers can bid aggressively on trade-ins and try to “buy” some car deals. However, once the cars are fixed, what’s the incentive to trade in the first place?

The bottom line here is that GM’s incentive isn’t very well thought out. Many GM dealers aren’t going to want Toyota trade-ins until the recall is fixed, so they’re going to low-ball every Toyota owner they see. At best, this promo simply won’t work. At worst, the decision to try and profit from Toyota’s mistakes will hurt GM’s image. It’s interesting to note that Hyundai, Honda, Ford, and Chrysler have all steered away from this type of incentive. The fact that GM is alone in this offer is even more evidence of the risk they’re taking.