Ford Motor Company recently announced an “SFE” – or “Superior Fuel Economy” – package for the upcoming 2009 F150. While Ford touts this package as evidence of their commitment to “unsurpassed fuel economy,” we think this package is more of a marketing ploy than a true product for fuel misers. Here are the details: 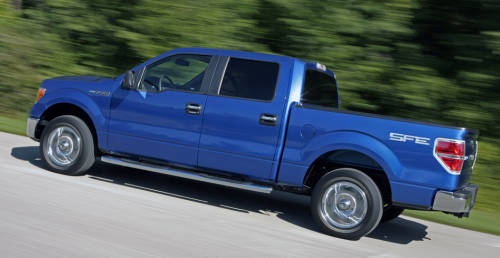 In other words, Ford is taking their standard 6-speed automatic, their small V8, a set of passenger car tires, and a sticker that says “SFE” and slapping them together to create an “unsurpassed fuel economy package.”

It’s very nice to see Ford working hard on improving fuel economy, and they certainly deserve credit for striving in that direction. However, the “SFE package” is nothing more than a marketing ploy that takes all of Ford’s standard truck improvements (like the new 6-speed auto and a more aerodynamic design) and calls them something special. While Ford certainly deserves credit for improving the fuel economy of all of the 2009 models, it’s embarrassing to brag about a “package” that’s little more than a set of standard features.