Forbes and Yahoo have compiled a list of the ten dirtiest vehicles on the road, and surprisingly this list is NOT dominated by pickups. Instead, the list identifies a handful of SUVs and uber-expensive luxury cars that are “dirty” – as in “most polluting.”

Their calculation is pretty simple – they take the EPA’s emissions score for each vehicle and add it to the EPA’s greenhouse gas score. Both scores are a number from 0 to 10, 10 being the best. The lowest scoring vehicles rank as “dirty.”

The ten dirtiest / highest polluting cars are (according to the list here):

There are some problems with this list. First, the Aspen and the Durango are essentially the same vehicle. Same goes for the S600 and the CL600 – mentioning the same platform twice results in a “double count” for these manufacturers. The list also doesn’t include heavy-duty trucks like the Ford SuperDuty or Dodge Ram 2500 (this class of vehicles are likely the dirtiest vehicles on the road).

Still, the data is interesting in that some of the vehicles with the worst fuel economy aren’t found. The Jeep Grand Cherokee with the 420hp 6.1L Hemi – which gets 11 mpg in the city and 14 mpg on the highway – is less of a polluter than the 4.7L (see below).

The article is also particularly hard on Chrysler. According to Forbes, the Grand Cherokee is a perennial member of this list, as are many other Chrysler vehicles.

Diving into the EPA’s scoring system, the pollution score is based on 4 categories of tailpipe pollutants:

The data table below shows the difference between the pollutants produced by a 2009 Jeep Grand Cherokee and the 2009 Toyota 4Runner. Both vehicles feature a 4.7L V8, making the comparison pretty close to equal. 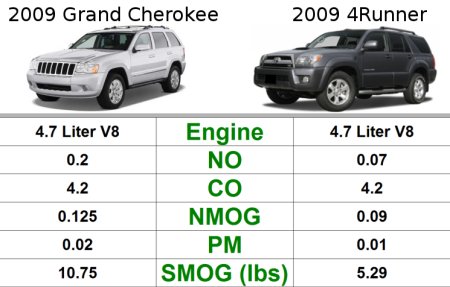 About the data – the numbers in the NO, CO, NMOG, and PM categories are represented as grams per mile.

If you take a look, you’ll notice that the Grand Cherokee pumps out almost twice as much particulate matter, nearly three times the amount of nitrous oxides, and 30% more of the chemicals that directly lead to smog. Despite the fact that these two vehicles have roughly the same fuel economy (the EPA gives them both a 15 mpg “combined” rating) the Jeep somehow manages to be a much bigger polluter.

The next obvious question is “Why?” The Jeep 4.7L does produce more horsepower (305) than the Toyota’s 4.7L (260), and the Jeep’s engine may be tuned more towards HP than pollution. It could also be that the Toyota has a better set of catalytic converters. Without all the data it’s hard to know for sure, but what is certain is that there’s a very big difference in pollution between these two.

If you’re interested in seeing the pollution scores of some other vehicles, check out the EPA’s Green Vehicle search system.

Special thanks to TXTee (a frequent commenter and a member of TundraNetwork) for sending us a link to this story. If you have an idea for an article you’d like to see here on TundraHeadquarters.com, please contact us.