Tundra Steel Wheel Problem – Snow and Ice Can Cause Vibrations

Tire and wheel balance is an important aspect of ensuring that your driveline is free of any annoying vibrations or steering pulls while traveling at speed. Most of us have experienced a situation where a balancing weight has fallen off of one of our front rims and introduced an annoying shake that can be felt through the steering wheel. There may have been other times, however, where you have encountered unexplained wheel vibrations that seem to come and go while shrouded entirely in mystery. 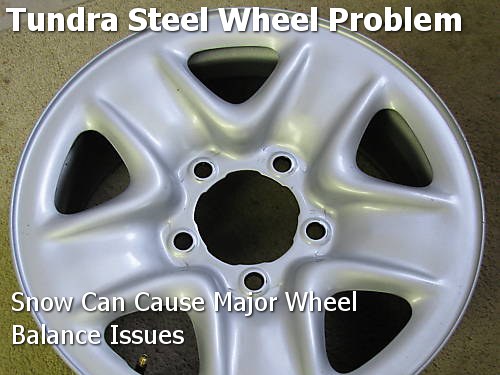 This is particularly true if you live in a northern climate where snow and ice are a regular feature of winter weather. If the stars align just right – and by stars, I mean weather conditions and driving habits – then you might fall victim to wheel unbalancing as a result of the elements.

Let me explain. The stock Toyota Tundra steel rims are designed with an interior lip that is almost invisible while the wheels are installed on the truck, but which can be seen after removing and reversing the units. This lip looks fairly harmless, and indeed it is, if the region you call home has mild winters. In colder areas, however, this lip has the unfortunate propensity to catch snow and ice and hold it there, where its weight unbalances the wheel and can in worst case scenarios make the truck completely undrivable at speeds of more than 45 miles per hour.

When we last checked in on the MotoIQ Toyota Tundra Project just a few short months ago, the truck had been tastefully customized with a few practical accessories, seen its paint and windows protected by 3M film and had a TRD cold air intake, air filter and high performance brake pads installed. This gave it a nice mix of both “show” and “go.” 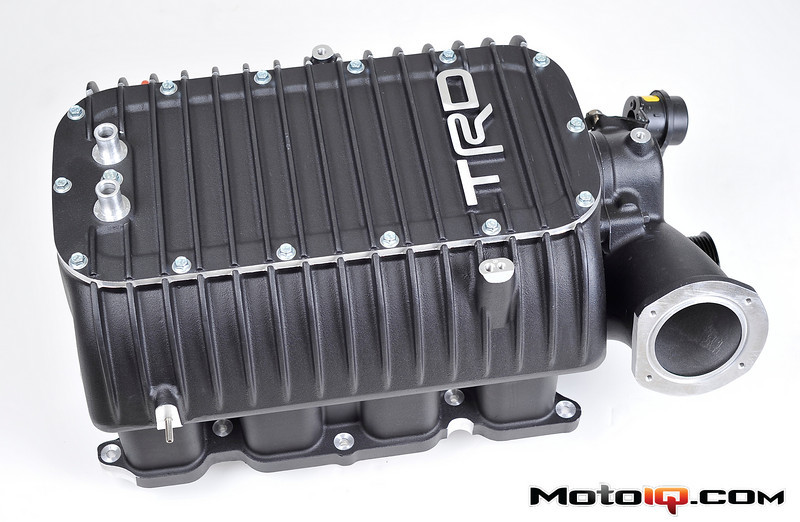 The advanced roots-style supercharger that comes with the TRD kit.

Well, the latest chapter in the MotoIQ Tundra Project sees the “go” aspect turned up to 11, thanks to the decision to boost engine output through the use of a TRD supercharger kit. The pickup’s 5.7 liter V8 will be treated to an Eaton TVS supercharger that includes an intercooler and which provides a very healthy 504 horsepower and 550 lb-ft of torque, with the latter starting a nice and low 4000 rpm.

It’s popular in the Ford truck community to brag about the fact that the F-series has been #1 in truck sales in the US for 30+ years running. The idea is that, because Ford sells the most trucks, they must make the best truck.

The trouble is, this logic is based on a false assumption. Sales figures aren’t proof of quality because consumer behavior isn’t logical. In fact, when it comes to cars, consumer buying behavior is incredibly illogical. Consider the following:

This is because, at the end of the day, vehicle sales aren’t just about vehicle quality. They’re also about emotions, perceptions, politics, personal experience, and more.

They say a picture is worth a thousand words, and in the world of viral video, a YouTube link can spew forth opinions at a rate many times that of a single photograph. There’s no denying the power of a well put together video, especially in the automotive world where many drivers adopt the attitude of “seeing is believing” when it comes to performance.

Unfortunately, just because a video has been produced in a professional and well-executed manner, there is no guarantee that the information presented is impartial. Promotional videos released via thinly-disguised publicity campaigns which adopt an air of third-party legitimacy are inherently deceptive. This is just as true in “political action committee” TV ads as it is in the hotly-contested full-size pickup truck market, where so much emphasis is put on comparing and contrasting the capabilities of the offerings from Ford, Chevrolet, Dodge and Toyota.

What you’re about to see is two different videos, each of which claims to do the exact same test…but with very different results. [Spoiler alert: GM lied about the way their trucks compare to the Tundra.]

Veterinarians have it tough. Not only are they required to diagnose and treat animals which have no capability of explaining their symptoms, but they are also often called upon to provide care outside of a clinical setting. This is especially true for vets who work with livestock or wild animals in nature preserves and parks. 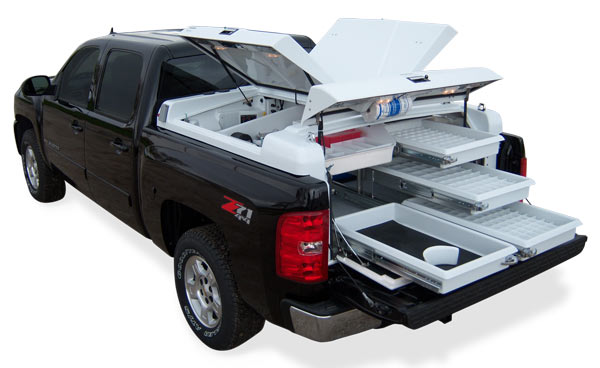 The good news is, when a veterinarian has to make a “house call” (more like “ranch call”), they can bring the office with them. A company called Bowie offers a unique “mobile command center” that fits into the bed of most pickups, including the Toyota Tundra. The Bowie Legacy 5 is a task-focused “Insert Clinic” that provides many of the services that vets require in a package that can be delivered anywhere a four-wheel drive truck can access.