All Entries in the "Buying a Tundra" Category

Toyota Extended Warranty Advice – Should You Buy One?

Extended warranties, love them or hate them, are always a consideration when buying a new Toyota Tundra. What things should you consider when buying one? 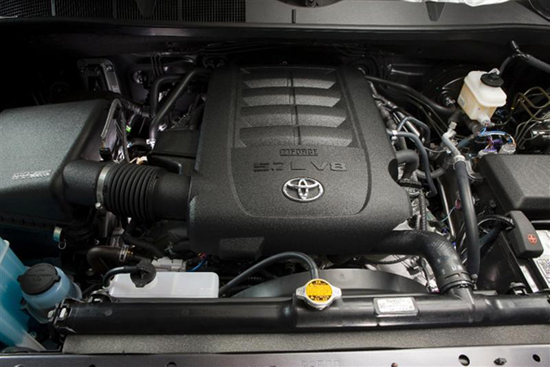 When you're ready to buy a new Toyota Tundra, should you consider buying an extended warranty?

It’s always great to say that the Tundra’s resale value is the best in the industry, but it’s starting to get a little old, isn’t it? We’ve talked at length about the Tundra’s superior resale value, citing studies from independent authorities like IntelliChoice and KBB.com that show the Tundra is number one in terms of resale.

Allow me to add Edmunds.com to the list for 2011. According to their newest study, the Tundra has the highest retained value of any light-duty pickup truck. Surprised? Me neither.

What is interesting, however, is that this year’s Edmunds.com study is an even more accurate measure of resale than any year prior…and that the way Edmunds is calculating ‘retained value’ should have favored Ford and GM a lot more than it did.

According to a recent press release issued by Edmunds.com, used car values are climbing. The reason? A lack of new vehicle production in 2008 and 2009 has led to an artificially shallow pool of used vehicles to choose from. This is good news for late-model vehicle owners everywhere…it’s been estimated that used car values will continue to climb for the next year or two. 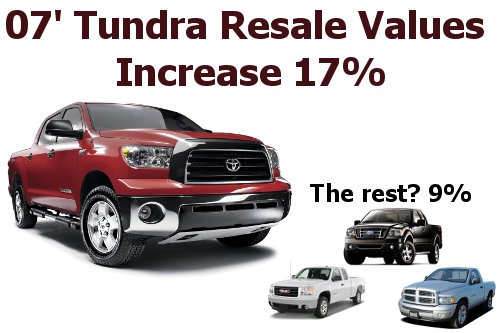 What’s particularly interesting is that Edmunds.com found 07′ Tundra resale value jumped 17% between September 2009 and September 2010. This increase is significantly higher than the rest of the large truck segment – which only increased 9%.

Why did Tundra resale values increase? Probably for the same reasons that Tundra resale value has always been excellent: consumers trust Toyota quality and reliability, and because Toyota doesn’t issue massive cash rebates to help sell trucks like Ford, GM, and Chrysler-Fiat.

Shopping For a Toyota Tundra in The Current Recession Climate

Before you walk into your dealership to make a new Tundra purchase, it’s worth taking a few moments to consider where the line stands at the moment, how Toyota is faring against the competition in the current industry crisis, and how the economic recession can work to the buyer’s benefit.

Since the 2010 Toyota Tundra has been slightly updated over the 2009, there are some differences to highlight:

– The 2009 model, which is still widely available, is offered in three styles of cab with three wheelbases, three bed lengths, three engines, and three trim levels. This essentially means customers can go from a 236 hp, 4-liter V6 in a standard or short-bed double cab to a 381-hp 5.7-liter engine. Maximum towing capacity in the line is 10,800 lbs and maximum bed length is 8.1 feet.

– Little of that has changed for 2010, but there is a new mid-range power choice, a 4.6-liter V8 (310 hp, six-speed automatic) with the line-topping 5.7-liter V8 offered on the CrewMax Limited models. All other changes for 2010 are cosmetic including billet-style grille, chrome bumpers, door still protectors, and unique 20-inch wheels — all part of the Platinum package.

Consider this a viable bargaining point. It’s highly likely a 2009 model will meet your needs at a potentially reduced price, since inventory reduction has been at the heart of Toyota’s strategy in recent months.