Some of the most interesting custom pickups are often put together by search and rescue organizations, as these groups prize absolute reliability and functionality above almost all else. Search and rescue trucks, like the Amfibia Toyota Tundra, are also typically outfitted with special technology that helps them to adapt to the rough and rugged environments that they are asked to operate in.

It takes more than a little water to slow down the Amfibia Tundra.

The Amfibia Toyota Tundra was put together by Polish outfitter Expedycja.pl in partnership with the Gdynia Maritime Academy, AMZ Kutno, the Automotive Industry Institute and SPRINT SA in response to a project request from the National Center for Research and Development. Their mission: to create a ‘mobile command system’ capable of performing surveillance and reconnaissance while also serving as an operational communications center. The catch: the vehicle needs to be able to operate on all foreseeable forms of terrain as well as open water. 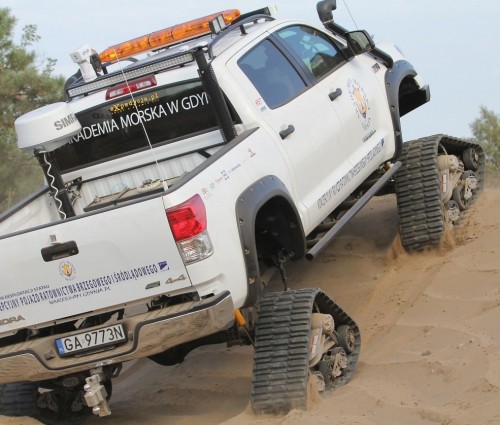 Mattracks offer versatile traction for a wide rrange of terrain.

Expedycja.pl elected to tackle this problem by giving the Amfibia Toyota Tundra three different modes of propulsion. In addition to 38-inch wheels, accommodated by a 10-inch lift, the Amfibia truck can also be equipped with four Mattracks that can tackle ultra-wet environments where rubber just can’t cut it. The most extreme modification made to the Tundra, however, is a flotation system that allows it to venture out onto the water and propel itself forward – and steer – without risk of sinking the truck. A watertight passenger compartment matches up with a deployable video camera system (including thermal imaging) in order to keep things safe while driving across a lake or river, while radar and underwater sonar help the Amfibia’s driver avoid hidden obstacles during inclement weather. 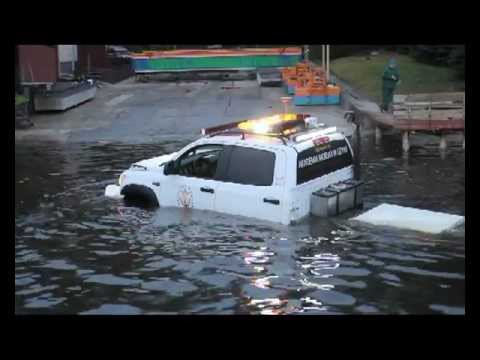 Visually, the Amfibia Toyota Tundra stands out due to its ARB front bumper, aggressive winches and highly modified cargo area that houses the vehicle’s pneumatic pump system that keeps vehicle’s bilge pumps running while attempting a water crossing. The truck also features a tall snorkel to keep the engine fed with a constant supply of water-free oxygen. 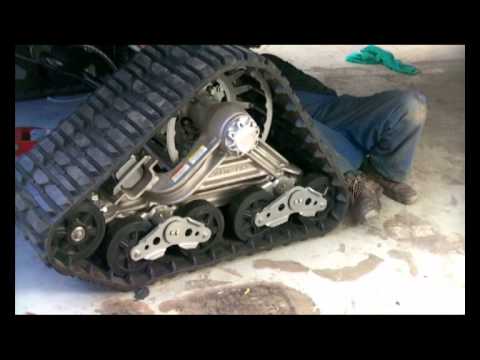 The Amfibia project is still in the initial testing stages, which means that it has been shown to be stable and safe in the water as well as during typical dryland driving. The next stage calls for the Gydnia Maritime Academy to take the Tundra out into actual search and rescue situations and push it to the edge to see just how viable it is as a command platform during sensitive operations.