Aerodynamics plays more of a role in automobile fuel efficiency than many people realize. In fact, when looking at vehicles as large as trucks even small tweaks to a body shape’s aero profile can pay dividends in terms of reducing gas consumption at highway speeds.

What Is Active Aero?

In the pursuit of better fuel economy, many automakers are turning to the field of active aerodynamics. Performance enthusiasts are most likely familiar with active aero applications in the racing and high-end sports car world, where spoilers deploy at certain speeds to help achieve greater straight-line stability, or air brakes pop up in order to haul racers down from triple digit speeds as quickly as possible. When it comes to fuel economy, active aerodynamics plays a more subtle, but no less important role in changing the flow of air around an automobile in order to maximize its slipperiness and reduce the amount of energy needed to keep it moving forward at a specific speed.

General Motors has been experimenting with a system which would reduce the amount of air entering the engine compartments of its full-size trucks while traveling on the highway. Typically, the amount of airflow hitting the truck’s radiator is far in excess of what is required for cooling purposes during normal driving, with the resulting drag caused by the airflow running up against the firewall and radiator working against the pickup from an efficiency standpoint. 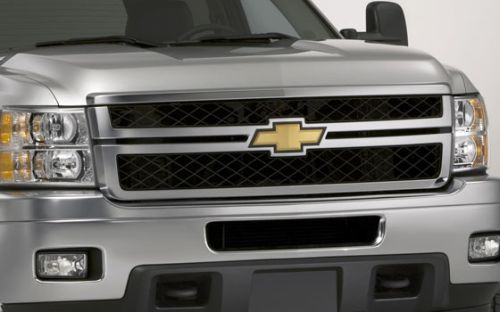 The solution for GM has been a system of louvers on the grille which open and close based on the cooling needs of the truck, keeping air out while cruising and opening when at a stop or when towing. Ford has also looked at adding these types of louvers to its trucks, for the same purposes. It already offers the technology on some models of the Ford Focus compact car.

The majority of aerodynamic work in the pickup world is still focused on making static improvements to the vehicle’s overall shape, including reducing the truck’s wake as it passes through the air, redirecting air flow over the cargo bed and lowering the amount of air that passes under the truck where it can encounter resistance from the chassis and suspension – not to mention the not-so-smooth underside of the cab and bed. Active aero, however, looks likely to play an increasingly important role as major automakers are forced to fight for every last MPG due to increasingly stringent federal regulations regarding corporate average fuel economy.

The question is, will the improvement in gas mileage justify the increased cost and complexity of an active aerodynamic system?

What do you think – would you buy this feature if it improved fuel economy enough to pay for itself?

How many times would it have to pay for itself to make it worthwhile?