This time last year, we made 5 auto industry predictions for 2009…and we did OK. While we were right about Saab and Saturn closing, Ford’s sale of Volvo, and Ford’s stock price, we were completely and totally wrong about the sales volume. Our gas price prediction was wrong too, but we weren’t off by much. All in all, a decent set of predictions for 2009. Here’s what we’re predicting for 2010: 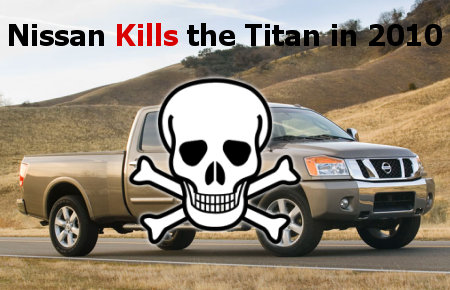 1. Nissan kills the Titan. It’s a bold prediction that we’re not 100% comfortable with, but here goes: The Titan doesn’t make money, so Nissan isn’t going to keep it. Nissan is on track to sell about 18,000 Titans in 2009. While that number is impacted by a bad sales year, 2010 isn’t going to be much better. After all, even if industry sales improve 20% next year, the Titan is still going to be the oldest design in the marketplace. There’s no reason to expect Titan sales in 2010 to improve over 2009.

If the Titan continues to be a slow seller at 15,000 – 20,000 units sold in 2010, Nissan will be losing money on this truck. Most experts believe that 20,000 units is the threshold for profitable production. So, unless Nissan can find a partner to share the production costs of the next Titan, small profits, aggressive new fuel economy and emissions rules, and a fiercely competitive truck market will conspire to kill Nissan’s full-size pickup. R.I.P.

2. Ford’s Fiesta is a run-away success. Ford is going to turn heads this year with the Fiesta. All the early accounts show that the new Fiesta will take sales away from Toyota, Honda, and Hyundai. While Ford has always been a strong truck and SUV company, their success with the Fiesta (alongside strong sales of the Focus and Fusion) will show Ford can be a strong car company too. Ford is back on track, folks, and 2010 will be a big year for them.

3. The US auto market will see a 20% increase in sales over 2009. This is another bold prediction, but here’s why we’re confident this prediction will come true:

4. Low payment leases are coming back. Leasing is a pendulum – a low volume of new vehicle sales in 2008 and 2009 means that used 2009 and 2010 model year vehicles will have strong resale values. In turn, strong resale values support higher residual values…and higher residual values support low lease payments. Don’t be surprised to see a lot of $200-$300 no money down lease deals next summer – even from the domestics.

5. Toyota’s Prius Compact will steal some of the Volt’s thunder. While it’s somewhat speculative, we’re 90% confident Toyota will show off a Prius compact at the Detroit Auto Show next week. GM’s new Volt might be a true plug-in hybrid, but an even lighter version of the Prius Sedan will likely offer incredible fuel economy figures AND decent performance at a much lower cost.

If the GM Volt is a $40,000 coupe with a 40 mile plug-in range, and Toyota’s Prius Compact is a $20k car that gets 60 mpg, most auto writers are going to tell the American public to buy the Prius Compact and skip the uber-expensive Volt.

Comments? Feel free to critique our predictions and offer your own predictions below. Happy new year!