10 Most Outrageous Truck Quality Problems Of The Last Decade

All of the recent and damning evidence uncovered in the first-gen Tundra frame rust investigation has been discouraging. How could Toyota and the frame supplier Dana underestimated the potential for rust so profoundly? Why has Toyota let this issue go so far? Clearly, a critical error in quality has been made. Toyota’s image will depend on how they take care of the problem.

However, no matter what you may think about the Toyota Tundra frame rust issue (we think it stinks), this problem is fairly comparable to problems that other truck manufacturers have had in the last decade.

Here’s are the 10 most outrageous truck quality issues of the last 10 years:

UPDATE: Ford’s SuperDuty flames are definitely outrageous, but they really shouldn’t take the place of the Tundra’s tailgate failures. So…the SuperDuty will get slot #11 so we can make room for a poorly designed tailgate that buckled under normal weight.

Ford’s engineers jumped on top of this issue almost immediately. In terms of an actual “quality” problem, it’s barely on the radar. However, in terms of outrageous…it’s off the charts. SO, it makes the list.

Watch the video and you’ll see flames 2-3 feet long shooting out of a 2008 SuperDuty exhaust pipe.

Toyota’s engineers royally screwed up the launch of the 2nd generation Tundra when they forgot to make the tailgates strong enough to support more than a couple of hundred pounds. At least Toyota replaced the Tundra tailgates that failed…eventually.

NHTSA investigated 30 reports of 00′ and 01′ Dodge Ram hoods flying open while driving. Normally, if a driver doesn’t fully latch his or her hood, there’s a secondary safety latch in place to keep the hood from flying open. However, 00-01′ Rams used a secondary latch mechanism that was vulnerable to rust. When these owners forgot to latch the hood, they got a nasty surprise. 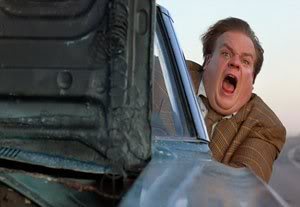 Car hoods flying open are only funny in the movies.

Approximately 800,000 GM 99-02′ trucks registered in the “salt belt” were recalled in 2005 because the ABS wheel speed sensors were vulnerable to corrosion…and subsequent malfunction. In terms of safety risk, this recall was pretty minor. The problem was that when the ABS came on at low speed, a lot of people ran into something. NHTSA received 840 complaints and 244 crash reports associated with this problem. (244!)

NHTSA received 78 complaints from 2005-2007 F250 owners regarding violent front-end oscillations at highway speeds. Some of the owners report losing control of their vehicle as a result of this problem. While NHTSA could never pinpoint a safety issue, Ford did warn their dealers about this problem.

Imagine jumping into your 2005 F-150, cranking the key, and having the airbag explode right in your face. NHTSA is currently investigating this problem, but as of September of this year NHTSA has received 8 incident reports. Ford dealership technicians have told customers that the problem was an “inadvertent wire chafing issue.”

Keep an eye on this one – the results of the investigation should be out soon.

This isn’t a major problem, but it sure is annoying…and common. There are hundreds of separate complaints on CarComplaints.com about 1999-2002 Dodge Rams with cracked dashes. A quick search of “Ram cracked dash” tells the story. What was Dodge thinking? This seems like a quality problem that, frankly, should never occur.

In September 2005 NHTSA investigated 1997-2002 F-Series trucks after receiving 474 separate complaints about “spark plug ejections.” For some reason or another, as the Triton series of motors of this time period (the 4.6L V8, 5.4L V8, and 6.8L V10) got some wear and tear, spark plugs shot out of the engine like little bullets. 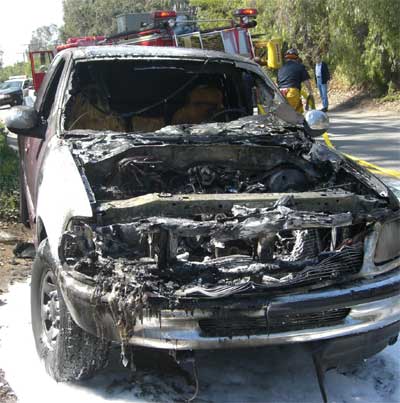 This F150 caught fire when an ejected spark plug hit a fuel line. Image from ConsumerAffairs.com

Despite the image above (see more on ConsumerAffairs.com) NHTSA’s official investigation says that damage was usually “limited to the engine,” and therefore it was NOT a safety issue…which is a small consolation to anyone that had to buy a replacement cylinder head. 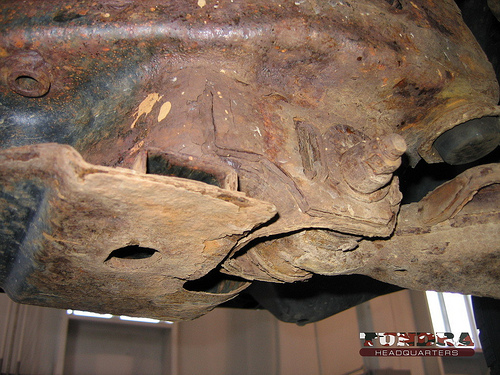 2000-2001 Tundras are being investigated by NHTSA for major rust problems.

NHTSA is investigating 2000-2001 Toyota Tundras for frame rust problems, and we fully anticipate this investigation will lead to some sort of recall and/or warranty program. According to our readers, rust is so bad on some of these Tundras that spare tires and brake lines are literally falling off the truck because the frame can no longer support their weight. Read all about Tundra frame rust and the NHTSA investigation…and our belief the frame rust problem might not be limited to 2000-2001 Tundras.

The potential for a spontaneous vehicle fire, however remote, is downright scary. GM recalled nearly one million vehicles (many of which were decked-out pickups) after determining that their “hot-shot” heated windshield washer fluid system could short out and cause a fire. Only 3 fires have been reported, likely thanks to GM’s efforts to issue a recall as soon as they realized there was an issue. 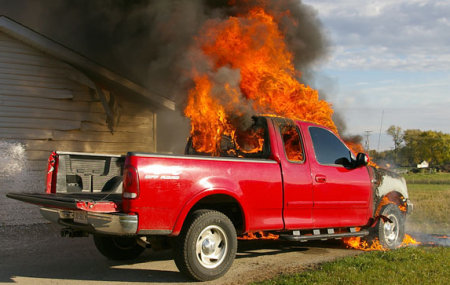 This F150 caught fire while parked as a result of a defective cruise control switch. Luckily it was outdoors.

Ford and Texas Instruments get first place on this list for two reasons. First, the potential of a spontaneous fire (even if the key isn’t in the ignition) is the definition of an unsafe product. Second, Ford and T.I. have yet to acknowledge this as a safety issue, despite 2 deaths and millions of dollars in property damage linked to this problem.

Starting in 1992, Ford installed cruise-control switches manufactured by T.I. in nearly all of their vehicles. By the late 90’s, Ford acknowledged a potential issue by recalling 280k 92-93 Crown Vics and Mercury Grand Marquis. This small recall was followed by a series of larger recalls over the next decade. Each time, Ford refused to acknowledge a safety problem while simultaneously paying for replacement switches.

As of last week, yet another recall has been announced for this same issue. Ford has now recalled a total of 14.1 million vehicles for this problem over the last 10 years. NHTSA reports a total of 550 fire incidents as a result of this problem. These fires have also been blamed for the deaths of an elderly woman and a four year old girl – both of whom died after their burning vehicles caught their homes on fire while they slept. 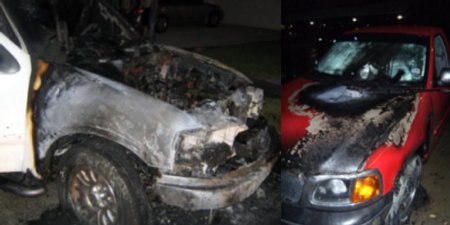 Hundreds of fires and 2 deaths are blamed on faulty cruise control switches.