Just in case you missed it last week, there were a couple of “little” recalls on the 2009 Ford F150 and the 2009 Dodge Ram. Nothing big mind you, just a couple of small items that won’t be a big deal (unless of course they become a big deal).

First, the Ram. According to TruckBlog.com:

Chrysler has issued a recall of nearly 40,000 2009 Dodge Ram light duty pickup trucks equipped with the manual temperature control where the software programmed for the heating ventilation and air condition module may cause the defrosting and defogging functions to become non-functional. The result of this can lead to a decrease in visibility and raise the chance of crashing.

No big deal really…unless your defroster doesn’t work and you can see out of the winsheild. At least you can stick your head out the window.

2009 Dodge Ram owners might have to stick their heads out of their trucks.

Ford is recalling 8,735 of its 2009 F-150 trucks because a faulty brake stop lamp switch may cause the brake lights to fail to illuminate

No big deal – unless someone is counting on seeing your brake lights to keep from running into you (you know, like while driving).

Every manufacturer has recalls (and both of these are relatively minor), and we’re certainly not trying to make light of the safety risks these recalls present, but the next time a Ford or Dodge owner razzes you about your Tundra, you know what to hit them back with. Now for a couple of funny pictures:

First, check out this Ram (shout out to Bruce for sending this over): 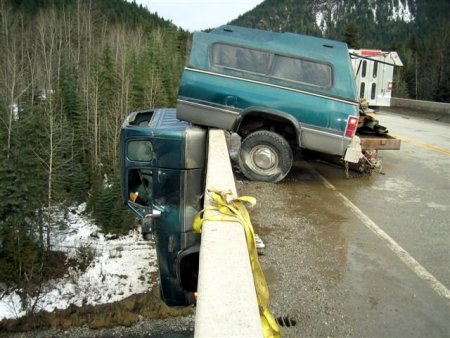 A Dodge Ram with a busted frame, courtesy of FunnyJunk.com.

This Dodge Ram seems to have suffered some sort of frame failure. The good news is that whatever is in the back/tied to the bumper was heavier than the cab. Maybe this is one of those Rams with the “break-away” frame option.

Here’s an S-10 Blazer with a few too many pounds worth of 5th wheel attached. 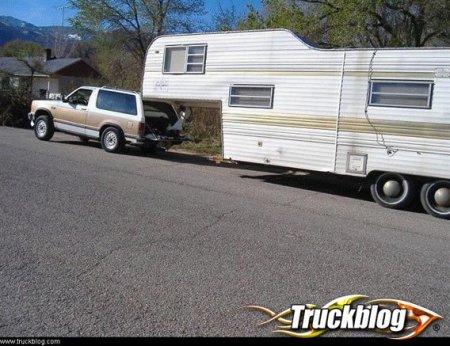 Towing a little too much with an S-10 Blazer. Image from Truckblog.com.

The people over at TruckBlog had some choice words for this person – a little offensive, but funny nonetheless.